Reading Aloud in the Context of the Task Set Paradigm: New Perspectives 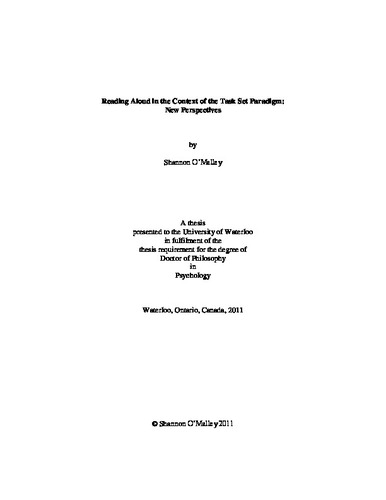 In a series of five experiments I examined whether intention (as operationalized by task set) affects the processes involved in reading. The Task Set paradigm (Besner & Care, 2003) was used in all experiments. On each trial subjects were cued to perform one of two tasks on each trial, on half the trials the cue appeared before the target (750 SOA) and on the other half of trials the cue appeared at the same time as the target (0 SOA). In Experiment 1, nonword letter length and complexity did not interact with SOA when reading aloud. This suggests that target processing awaits the implementation of a task set. In Experiment 2 and 3, when only words were presented, word frequency and SOA interacted such that there was a smaller effect of word frequency at the 0 SOA relative to the 750 SOA. This suggests that lexical processing can go on in parallel with cue decoding. However, in Experiment 4, when words and nonwords were combined there was no interaction between word frequency and SOA. Participants appear to now wait to read the target word until the cue is processed, therefore reading aloud words can be affected by intention. Finally, in Experiment 5, when the task was to generate an antonym (instead of reading aloud), word frequency was additive with SOA. This suggests that at least some aspect of semantic processing (when generating an antonym) is delayed until cue processing is complete. These results, considered alongside results from the Psychological Refractory Period paradigm are taken to imply that sublexical processing uses both attention and intention. Critically, lexical and semantic processing may not require a form of attention, but they can be affected by intention. This runs contrary to the received view that reading aloud is automatic in the sense that it does not require intention, thus a radical change in how we think about the process of reading aloud is needed.