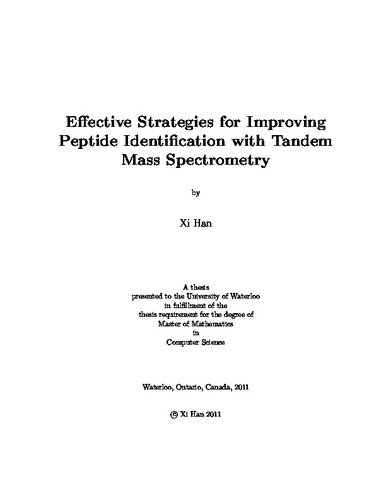 Tandem mass spectrometry (MS/MS) has been routinely used to identify peptides from protein mixtures in the field of proteomics. However, only about 30% to 40% of current MS/MS spectra can be identified, while many of them remain unassigned, even though they are of reasonable quality. The ubiquitous presence of post-translational modifications (PTMs) is one of the reasons for current low spectral identification rate. In order to identify post-translationally modified peptides, most existing software requires the specification of a few possible modifications. However, such knowledge of possible modifications is not always available. In this thesis, we describe a new algorithm for identifying modified peptides without requiring users to specify the possible modifications before the search routine; instead, all modifications from the Unimod database are considered. Meanwhile, several new techniques are employed to avoid the exponential growth of the search space, as well as to control the false discoveries due to this unrestricted search approach. A software tool, PeaksPTM, has been developed and it has already achieved a stronger performance than competitive tools for unrestricted identification of post-translationally modified peptides. Another important reason for the failure of the search tools is the inaccurate mass or charge state measurement of the precursor peptide ion. In this thesis, we study the precursor mono-isotopic mass and charge determination problem, and propose an algorithm to correct precursor ion mass error by assessing the isotopic features in its parent MS spectrum. The algorithm has been tested on two annotated data sets and achieved almost 100 percent accuracy. Furthermore, we have studied a more complicated problem, the MS/MS preprocessing problem, and propose a spectrum deconvolution algorithm. Experiments were provided to compare its performance with other existing software.