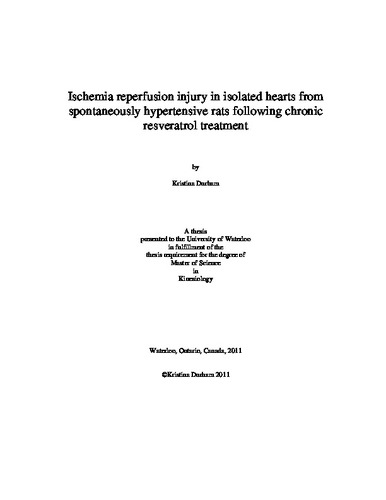 Hypertension is a risk factor for myocardial ischemia via the promotion of endothelial dysfunction and atherosclerosis (Ogita et al., 2004). Hypertension not only a predisposes the heart to ischemic events, but as shown by clinical and experimental studies, exacerbates the heart’s susceptibility to ischemia-reperfusion injury (Golden et al., 1994; Besík et al., 2007; Snoeckx et al., 1986) due to impairments in regulation of calcium handling, ion homeostasis, and energy metabolism (Galiñanes et al., 2004). Nutraceuticals have demonstrated beneficial and protective effects on both hypertension and ischemia reperfusion injury. Resveratrol, a naturally occurring polyphenol which is present in grapes and wine, acts as a cardioprotective agent and can be used to protect the heart against ischemia reperfusion injury. Here we investigate the effectiveness of chronic dietary resveratrol intake in normotensive and hypertensive rats on protection against ischemia-reperfusion injury, assessed in an isolated perfused Langendorff heart model. Rats ingested either a High dose of 2.7mg/day-which mimicked the resveratrol content in daily supplemental intake levels, a Low dose of 0.027mg/day- which mimicked the resveratrol content in moderate red wine intake, or no resveratrol in the drinking water for 28 days, at which point hearts were excised and mounted on a Langendorff apparatus. Once stable conditions were established all hearts were subjected to 30 minutes of no flow ischemia followed by 2 hours of reperfusion. Interestingly, SHR animals did not exhibit reduced recovery, or increased infarct size as compared to WKY. Infarct size as measured by triphenyltetrazolium chloride staining after 2 hours of reperfusion was significantly reduced in High and Low groups (combined WKY and SHR) as compared to Controls (19.9±0.9 and 19.4±0.8 vs 27.7±0.7 % of baseline, p<0.0001). Left ventricular developed pressure was significantly improved 2 hours post ischemia in both High and Low groups (combined SHR and WKY) compared to Controls (83.1±4.1 and 78.6±3.4 vs.67.9±3.2% of baseline, p<0.01). A higher rate of maximal pressure development was maintained in High and Low groups (combined SHR and WKY) compared to Controls (90.5±4.7 and 95.6±5.0 vs.73.5±4.8% of baseline, p<.05). Resveratrol treatment at a High and Low dose reduced contracture of the myocardium as compared to Control (7.2±3.0 and 6.9±2.9 vs. 20.1±2.9 mmHg- LVEDP, p<0.01). In conclusion resveratrol treatment at both a High and Low dose protects against a decline in cardiac function, and reduces infarct size post ischemia reperfusion. Additionally, tolerance to ischemia reperfusion injury in SHR is not reduced as compared to WKY.