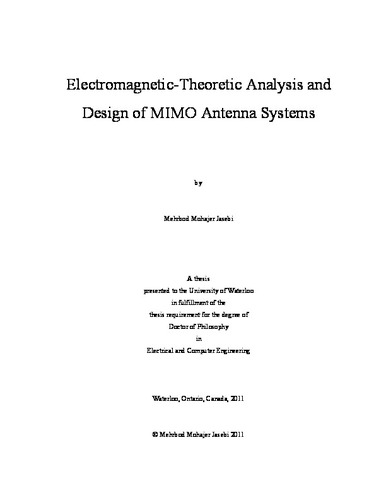 Multiple-Input Multiple-Output (MIMO) systems are a pivotal solution for the significant enhancement of the band-limited wireless channels’ communication capacity. MIMO system is essentially a wireless system with multiple antennas at both the transmitter and receiver ends. Compared to the conventional wireless systems, the main advantages of the MIMO systems are the higher system capacity, more bit rates, more link reliability, and wider coverage area. All of these features are currently considered as crucial performance requirements in wireless communications. Additionally, the emerging new services in wireless applications have created a great motivation to utilize the MIMO systems to fulfil the demands these applications create. The MIMO systems can be combined with other intelligent techniques to achieve these benefits by employing a higher spectral efficiency. The MIMO system design is a multifaceted problem which needs both antenna considerations and baseband signal processing. The performance of the MIMO systems depends on the cross-correlation coefficients between the transmitted/received signals by different antenna elements. Therefore, the Electromagnetic (EM) characteristics of the antenna elements and wireless environment can significantly affect the MIMO system performance. Hence, it is important to include the EM properties of the antenna elements and the physical environment in the MIMO system design and optimizations. In this research, the MIMO system model and system performance are introduced, and the optimum MIMO antenna system is investigated and developed by considering the electromagnetic aspects within three inter-related topics: 1) Fast Numerical Analysis and Optimization of the MIMO Antenna Structures: An efficient and fast optimization method is proposed based on the reciprocity theorem along with the method of moment analysis to minimize the correlation among the received/transmitted signals in MIMO systems. In this method, the effects of the radio package (enclosure) on the MIMO system performance are also included. The proposed optimization method is used in a few practical examples to find the optimal positions and orientations of the antenna elements on the system enclosure in order to minimize the cross-correlation coefficients, leading to an efficient MIMO operation. 2) Analytical Electromagnetic-Theoretic Model for the MIMO Antenna Design: The first requirement for the MIMO antennas is to obtain orthogonal radiation modes in order to achieve uncorrelated signals. Since the Spherical Vector Waves (SVW) form a complete set of orthogonal Eigen-vector functions for the radiated electromagnetic fields, an analytical method based on the SVW approach is developed to excite the orthogonal SVWs to be used as the various orthogonal modes of the MIMO antenna systems. The analytic SVW approach is used to design spherical antennas and to investigate the orthogonality of the radiation modes in the planar antenna structures. 3) Systematic SVW Methodology for the MIMO Antenna Design: Based on the spherical vector waves, a generalized systematic method is proposed for the MIMO antenna design and analysis. The newly developed methodology not only leads to a systematic approach for designing MIMO antennas, but can also be used to determine the fundamental limits and degrees of freedom for designing the optimal antenna elements in terms of the given practical restrictions. The proposed method includes the EM aspects of the antenna elements and the physical environment in the MIMO antenna system, which will provide a general guideline for obtaining the optimal current sources to achieve the orthogonal MIMO modes. The proposed methodology can be employed for any arbitrary physical environment and multi-antenna structures. Without the loss of generality, the SVW approach is employed to design and analyze a few practical examples to show how effective it can be used for MIMO applications. In conclusion, this research addresses the electromagnetic aspects of the antenna analysis, design, and optimization for MIMO applications in a rigorous and systematic manner. Developing such a design and analysis tool significantly contributes to the advancement of high-data-rate wireless communication and to the realistic evaluation of the MIMO antenna system performance by a robust scientifically-based design methodology.