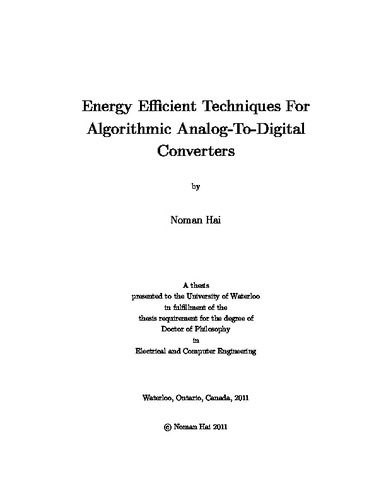 Analog-to-digital converters (ADCs) are key design blocks in state-of-art image, capacitive, and biomedical sensing applications. In these sensing applications, algorithmic ADCs are the preferred choice due to their high resolution and low area advantages. Algorithmic ADCs are based on the same operating principle as that of pipelined ADCs. Unlike pipelined ADCs where the residue is transferred to the next stage, an N-bit algorithmic ADC utilizes the same hardware N-times for each bit of resolution. Due to the cyclic nature of algorithmic ADCs, many of the low power techniques applicable to pipelined ADCs cannot be directly applied to algorithmic ADCs. Consequently, compared to those of pipelined ADCs, the traditional implementations of algorithmic ADCs are power inefficient. This thesis presents two novel energy efficient techniques for algorithmic ADCs. The first technique modifies the capacitors' arrangement of a conventional flip-around configuration and amplifier sharing technique, resulting in a low power and low area design solution. The other technique is based on the unit multiplying-digital-to-analog-converter approach. The proposed approach exploits the power saving advantages of capacitor-shared technique and capacitor-scaled technique. It is shown that, compared to conventional techniques, the proposed techniques reduce the power consumption of algorithmic ADCs by more than 85\%. To verify the effectiveness of such approaches, two prototype chips, a 10-bit 5 MS/s and a 12-bit 10 MS/s ADCs, are implemented in a 130-nm CMOS process. Detailed design considerations are discussed as well as the simulation and measurement results. According to the simulation results, both designs achieve figures-of-merit of approximately 60 fJ/step, making them some of the most power efficient ADCs to date.