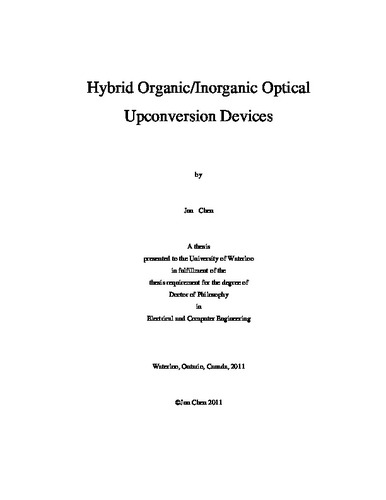 The widely available charge coupled device (CCD) and lately CMOS imaging devices have created many applications on a mass scale. However these devices are limited to wavelengths shorter than about 1 μm. Hybrid photon upconversion devices have been developed recently. The end goal is to achieve an alternative technology for imaging in the 1.5-μm region. The hybrid upconversion idea relies on the integration of a photodetector and an organic light emitting diode (OLED). Under a forward bias for the OLED, the detected signal in the Photodetector is sent to the OLED, resulting in an increase in emission at a shorter wavelength and therefore achieving optical up conversion. An OLED device can simply consists of a stack of anode, a hole transport layer (HTL), a light-emitting layer, an electron transport layer (ETL), a cathode layer, and it typically emits visible light. As each organic molecule is a topologically perfect structure, the growth of each organic layer does not require “lattice matching”, which has been the fundamental limit for inorganic semiconductor monolithic devices. Thus, integration of an OLED with a III–V compound semiconductor is a highly feasible and desirable approach for making low-cost, large-area, potentially high efficiency devices. This thesis addresses the physics, fabrication and characterization of hybrid near infrared optical upconverters and their imaging application. Firstly, one novel hybrid optical upconverter structure is presented, which substantially improves the upconversion efficiency by embedding a metal mirror. Efficient carrier injection from the inorganic photodetector to the OLED is achieved by the insertion of a thin Au metal embedded mirror at the inorganic-organic interface. The upconversion efficiency was improved by more than 100%. Secondly, the overall upconversion efficiency can be increased significantly, by introducing a gain mechanism into the Photodetector section of the upconverter. A promising option to implement gain is a heterojunction phototransistor (HPT). An InGaAs-InP HPT was integrated with an OLED, which converts 1.5-μm Infrared light to visible light with a built-in electrical gain (~94). The overall upconversion efficiency was improved to be 1.55 W/W. Thirdly, this upconversion approach can also be used to realize a pixelless imaging device. A pixelless hybrid upconversion device consists of a large-area single-mesa device, where the OLED output is spatially correlated with the input 1.5-µm scene. Only the parts receiving incoming photons will emit output photons. To achieve this functionality, photon-generated carriers must flow mainly along the layer-growth direction when injected from the InGaAs light absorption layer into OLED light emission layer. A prototype of pixelless imaging device based on an i-In0.53Ga0.47As/C60 heterojunction was demonstrated, which minimized lateral current spreading. This thesis presents experimental results of the first organic/inorganic hybrid optical amplifer and the first hybrid near infrared imaging device.