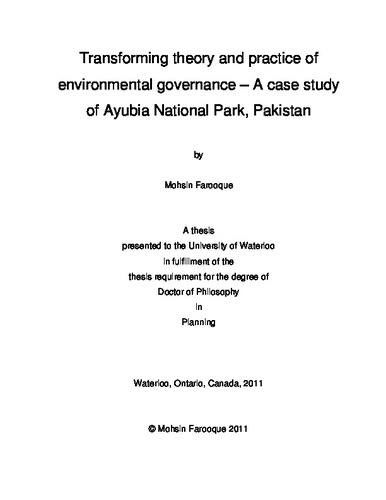 Parks and protected areas are long-regarded as effective measures for conservation of biodiversity. More recently, they are also recognized as a means to provide social and economic benefits and indefinite ecological and environmental services, particularly to local communities. Historically, parks and protected areas have been managed through an exclusive model, whereby local communities are regarded as a threat to biodiversity preservation. More recently, this model is being replaced by an inclusive model which regards local communities as important stakeholders and partners in sustainable resource management. Like other developing countries of the world, Pakistan is switching to the inclusive model, mostly under the influence and pressure of the world community and external donors. This thesis focuses on the Ayubia National Park (ANP) in Pakistan. This park is managed by the provincial government of the Khyber Pakhtunkhwa Province through the Wildlife Department. At the same time, the park falls within the jurisdiction of the Forest Department by virtue of its being located within reserve forest. Until 1996, the traditional exclusive conservation model was predominant. Under the influence of the European Union (EU) and IUCN – The World Conservation Union – the inclusive approach has been tested in the park since 1996. Accordingly, the first park management plan was prepared with the active collaboration of all local communities, the WWF-Pakistan, and the Forest and Wildlife Departments. The planning document was designed to promote co-management and incorporate the viewpoints of all the local communities in park management. Following termination of EU funding, the plan was implemented, but without active involvement of the local communities. Evidence presented in this thesis shows that, due to strict management in line with the traditional exclusive conservation model, park resources have improved to a certain extent. However, failure in implementing the mutually agreed planning document has resulted in local communities developing serious mistrust against the Wildlife Department. This thesis suggests that short-term improvements in park resources mask the persistent problems of poor governance in the study area. The thesis shows that marked differences between the Forest and Wildlife Departments, and between local communities and the concerned government agencies provide a poor foundation for long-term sustainable resource management. Thus ineffective governance lies at the heart of resource management problems within the park. The thesis recommends that in order to effectively address the current park-people conflicts a state-centric co-management model should be pursued. Such a hybrid model will have the strengths of both the exclusive and inclusive models. The thesis further presents a framework focusing on effective environmental governance, effective management and effective planning. Importantly, the thesis argues that for effective environmental governance to be realized, the management approach must be place-based and site-specific. Thus, the thesis recommends both micro and macro level environmental governance measures. Such measures can be undertaken through proper institutional reforms that are undertaken at three distinct levels: legislative reforms, educational reforms and organizational reforms.