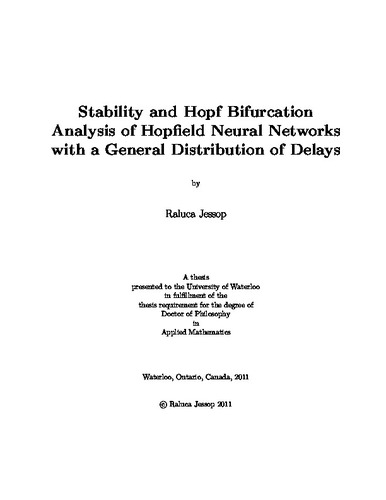 We investigate the linear stability and perform the bifurcation analysis for Hopfield neural networks with a general distribution of delays, where the neurons are identical. We start by analyzing the scalar model and show what kind of information can be gained with only minimal information about the exact distribution of delays. We determine a mean delay and distribution independent stability region. We then illustrate a way of improving on this conservative result by approximating the true region of stability when the actual distribution is not known, but some moments or cumulants of the distribution are. We compare the approximate stability regions with the stability regions in the case of the uniform and gamma distributions. We show that, in general, the approximations improve as more moments or cumulants are used, and that the approximations using cumulants give better results than the ones using moments. Further, we extend these results to a network of n identical neurons, where we examine the stability of a symmetrical equilibrium point via the analysis of the characteristic equation both when the connection matrix is symmetric and when it is not. Finally, for the scalar model, we show under what conditions a Hopf bifurcation occurs and we use the centre manifold technique to determine the criticality of the bifurcation. When the kernel represents the gamma distribution with p=1 and p=2, we transform the delay differential equation into a system of ordinary differential equations and we compare the centre manifold computation to the one we obtain in the ordinary differential case.