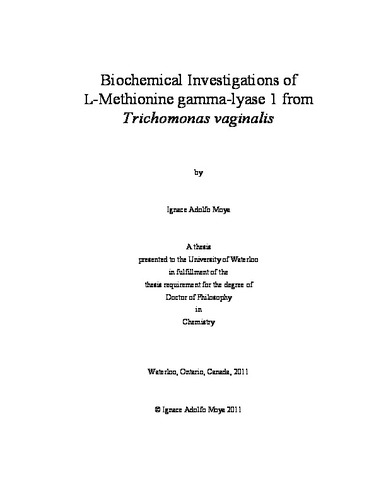 The enzyme L-methionine γ-lyase (MGL) utilizes a pyridoxal-5’-phosphate-cofactor in order to convert L-methionine to α-ketobutyrate, ammonia and methyl mercaptan. MGL is proposed to be a potential drug target since it is expressed in the human pathogens, Trichomonas vaginalis and Entamoeba histolytica, but not in humans. There is currently a need to find alternative drug targets for these pathogens, because the misuse and overuse of the currently prescribed drugs of choice, metronidazole and tinidazole, have lead to drug resistance. The overall goal of this thesis was to examine the chemistry of MGL 1 from T. vaginalis (TvMGL1) by probing the active site by site-directed mutagenesis and with fluorinated methionine analogs. The mutation of the active site residue Cys113 to Ser led to a 5-fold decrease in turnover rate for L-methionine relative to the wild-type enzyme. The results suggest that the active site C113 residue plays an important role in catalysis and is consistent with literature reports for MGL homologs from Pseudomonas putida and E. histolytica. Probing the active site of TvMGL1 with the fluorinated methionine analogs, L-difluoromethionine (DFM) and L-trifluoromethionine (TFM), were found to increase the turnover rate of the enzyme with an increase in fluorine substitution. The results suggest that the bulky fluorine atoms do not interfere with the Michaelis-Menten kinetics of the enzyme, and the γ-elimination step is rate determining. The second goal of this thesis was to identify the reactive intermediates generated by the processing of TFM and the uninvestigated DFM by TvMGL1, and to investigate the theoretical and experimental chemistry and biochemistry of these fluorinated groups (CF3S- and CF2HS-). The reactivity of the intermediates, generated from the processing of DFM by TvMGL1 was correlated to the cytotoxicity observed in model organisms expressing TvMGL1, and consistent with the hypothesis that the intermediates will result in the thioformylation of primary amines. The results suggest that cytotoxicity requires thioacylation of a single primary amine, while sequential cross-linking of primary amines is not an absolute requirement. The relationship between the chemical structure of the reactive intermediates produced from the enzymatic processing of these analogs and their cellular toxicity is discussed. Attempts at the synthesis of 3,3-difluoro-O-methyl-L-homoserine were undertaken in order to examine the catalytic mechanism of TvMGL1, since the compound is expected to inhibit the enzyme. To ensure that the oxo moiety does not impede the chemistry of the enzyme, the analog, O-methyl-L-homoserine was examined as a potential substrate for TvMGL1. Several synthetic routes to 3,3-difluoro-O-methyl-L-homoserine were examined; however, attempts to fluorinate the β-carbon atom of the starting material were unsuccessful.