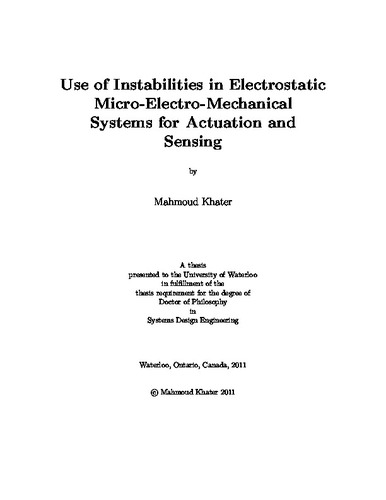 This thesis develops methods to exploit static and dynamic instabilities in electrostatic MEMS to develop new MEMS devices, namely dynamically actuated micro switches and binary micro gas sensors. Models are developed for the devices under consideration where the structures are treated as elastic continua. The electrostatic force is treated as a nonlinear function of displacement derived under the assumption of parallel-plate theorem. The Galerkin method is used to discretize the distributed-parameter models, thus reducing the governing partial differential equations into sets of nonlinear ordinary-differential equations. The shooting method is used to numerically solve those equations to obtain the frequency-response curves of those devices and the Floquet theory is used to investigate their stability. To develop the dynamically actuated micro switches, we investigate the response of microswitches to a combination of DC and AC excitations. We find that dynamically actuated micro switches can realize significant energy savings, up to 60 %, over comparable switches traditionally actuated by pure DC voltage. We devise two dynamic actuation methods: a fixed-frequency method and a shifted-frequency method. While the fixed-frequency method is simpler to implement, the shifted-frequency method can minimize the switching time to the same order as that realized using traditional DC actuation. We also introduce a parameter identification technique to estimate the switch geometrical and material properties, namely thickness, modulus of elasticity, and residual stress. We also develop a new detection technique for micro mass sensors that does not require any readout electronics. We use this method to develop static and dynamic binary mass sensors. The sensors are composed of a cantilever beam connected to a rigid plate at its free end and electrostatically coupled to an electrode underneath it. Two versions of micro mass sensors are presented: static binary mass sensor and dynamic binary mass sensor. Sensitivity analysis shows that the sensitivity of our static mass sensor represents an upper bound for the sensitivity of comparable statically detected inertial mass sensors. It also shows that the dynamic binary mass sensors is three orders of magnitude more sensitive than the static binary mass sensor. We equip our mass sensor with a polymer detector, doped Polyaniline, to realize a formaldehyde vapor sensor and demonstrate its functionality experimentally. We find that while the static binary gas sensor is simpler to realize than the dynamic binary gas sensor, it is more susceptible to external disturbances.

Mahmoud Elsayed Khater (2011). Use of Instabilities in Electrostatic Micro-Electro-Mechanical Systems for Actuation and Sensing. UWSpace. http://hdl.handle.net/10012/6398