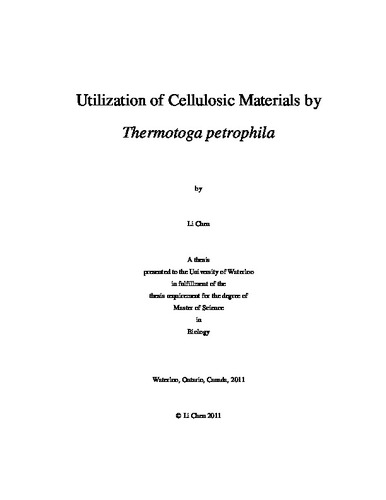 Thermotoga petrophila is a hyperthermophilic anaerobic bacterium that grows optimally at 80° C. It can utilize plant biomass to produce biofuels, including ethanol and hydrogen, which are alternative and renewable sources of energy. Xylan, microcrystalline avicel PH105, switchgrass, corn husks and wheat straw were used as growth substrates to determine T. petrophila’s capability to use different types of plant biomass for the production of ethanol and hydrogen. The metabolism of cellulosic substrates was analyzed by integrating proteomics analysis, gene identification, cellulase and xylanase activities, growth, metabolic products and cell adhesion. T. petrophila showed best growth on xylan, followed by corn husks, switchgrass, avicel PH105 and wheat straw. The optimal pH for higher biofuel yield was within the range of 8.0 to 8.5. The metabolic end products were H2, CO2, acetate, lactate, formate and succinate when T. petrophila grew on all the tested cellulosic materials. The highest yield of hydrogen (9.6 mM) and the highest yield of ethanol (0.95 mM) were both detected when T. petrophila was grown on xylan. No growth was observed on xylose, which was not expected because T. petrophila grew very well on xylan, a β-1, 4-xylopryranose polymer from which xylose can be produced upon hydrolysis. The possible reason for this phenomenon may be that T. petrophila has no specific sugar transporters for xylose, although it contains all the genes encoding xylose metabolizing enzymes. The majority of exoglucanases and endoglucanases presented in T. petrophila were extracellular enzymes. The highest specific activities of exoglucanase (1361.3 mU/mg) and endoglucanase (1032.1 mU/mg) in T. petrophila were found in the supernatants of the growth culture with xylan as the sole substrate, indicating that xylan, not cellulose, is the best inducer to increase the expression of extracellular cellulases. Compared to the huge discrepancy of extracellular cellulases activities among different substrates (from 0 to 1361.3 mU/mg), intracellular cellulase (endoglucanase) activity was relatively steady (around 150 mU/mg). Xylanase activity was also detected in both the supernatant and the cell free extract; thus T. petrophila contains both extracellular and intracellular xylanase. The highest xylanase activity was detected in the cell free extract when T. petrophila was grown on cellobiose and xylan (3732.4 mU/mg and 3152.8 mU/mg, respectively), indicating that the majority of xylanase is an intracellular enzyme, and xylan and cellobiose are the best inducers to increase the expression of xylanase. Adhesion of T. petrophila cells to xylan, with many filaments connecting all the cells, was observed using scanning electron microscope and fluorescent staining microscope, whereas there was no attachment between cells and cellulose. This difference may explain why T. petrophila grew much better on xylan than on cellulose because cell adhesion increases enzyme concentration near the substrate to improve the efficiency of cellulosic material utilization. Furthermore, proteomics analysis was used to quantify all the expressed proteins in different growth media with various substrates. The proteomics data revealed that the most important enzymes for cellulose and hemicellulose utilization were ATP binding cassette (ABC) transporters, S-layer proteins and membrane binding proteins, which were up-regulated when T. petrophila was grown on cellulosic materials. The sodium dodecyl sulfate polyacrylamide gel electrophoresis (SDS-PAGE) also indicated the up-regulated proteins from the media with cellulosic substrates were probably ABC transporters and S-layer proteins based on the size of proteins. Based on the gene identification, end product determination and proteomics analysis, the tentative cellulosic material metabolic pathways in T. petrophila were completely profiled. Overall, our results suggest that the ability of T. petrophila to convert cellulosic materials into hydrogen and ethanol exceeds T. maritima, which is a model strain for studying hyperthermophiles. T. petrophila has great potential in applications of producing highly thermostable cellulases and biofuels from cellulosic materials. However, the mechanism of cell adhesion between T. petrophila and xylan and the regulation of the entire cellulosic materials metabolic pathway need further investigation.