Turbulent Drag Reduction by Polymers, Surfactants and Their Mixtures in Pipeline Flow 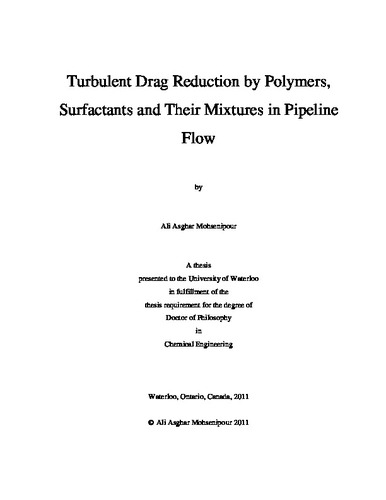 lthough extensive research work has been carried out on the drag reduction behavior of polymers and surfactants alone, little progress has been made on the synergistic effects of combined polymers and surfactants. A number of studies have demonstrated that certain types of polymers and surfactants interact with each other to form surfactant-polymer complexes. The formation of such complexes can cause changes in the solution properties and may result in better drag reduction characteristics as compared with pure additives. A series of drag-reducing surfactants and polymers were screened for the synergistic studies. The following two widely used polymeric drag reducing agents (DRA) were chosen: a copolymer of acrylamide and sodium acrylate (referred to as PAM) and polyethylene oxide (PEO). Among the different types of surfactants screened, a cationic surfactant octadecyltrimethylammonium chloride (OTAC) and an anionic surfactant Sodium dodecyl sulfate (SDS) were selected for the synergistic study. In the case of the cationic surfactant OTAC, sodium salicylate (NaSal) was used as a counterion. No counterion was used with anionic surfactant SDS. The physical properties such as viscosity, surface tension and electrical conductivity were measured in order to detect any interaction between the polymer and the surfactant. The drag reduction (DR) ability of both pure and mixed additives was investigated in a pipeline flow loop. The effects of different parameters such as additive concentration, type of water (deionized (DI) or tap), temperature, tube diameter, and mechanical degradation were investigated. The addition of OTAC to PAM solution has a significant effect on the properties of the system. The critical micelle concentration (CMC) of the mixed surfactant-polymer system is found to be different from that of the surfactant alone. The anionic PAM chains collapse upon the addition of cationic OTAC and a substantial decrease in the viscosity occurs. The pipeline flow behaviour of PAM/OTAC mixtures is found to be consistent with the bench scale results. The drag reduction ability of PAM is reduced upon the addition of OTAC. At low concentrations of PAM, the effect of OTAC on the drag reduction behavior is more pronounced. The drag reduction behavior of polymer solutions is strongly influenced by the nature of water (de-ionized or tap). The addition of OTAC to PEO solution exhibited a week interaction based on the viscosity and surface tension measurements. However, the pipeline results showed a considerable synergistic effect, that is, the mixed system gave a significantly higher drag reduction (lower friction factors) as compared with the pure additives (pure polymer or pure surfactant). The synergistic effect in the mixed system was stronger at low polymer concentrations and high surfactant concentrations. Also the resistance against mechanical degradation of the additive was improved upon the addition of OTAC to PEO. The mixed PEO/SDS system exhibited a strong interaction between the polymers (PEO) and the surfactant (SDS), Using electrical conductivity and surface tension measurements, the critical aggregation concentration (CAC) and the polymer saturation point (PSP) were determined. As the PEO concentration is increased, the CAC decreases and the PSP increase. The addition of SDS to the PEO solution exhibits a remarkable increase in the relative viscosity compared to the pure PEO solution. This increase is attributed to the changes in the hydrodynamic radius of the polymer coil. The pipeline flow exhibited a considerable increase in DR for the mixed system as compared to the pure PEO solution. The addition of surfactant always improves the extent of DR up to the PSP. Also the mixed PEO/ SDS system shows better resistance against shear degradation of the additive.