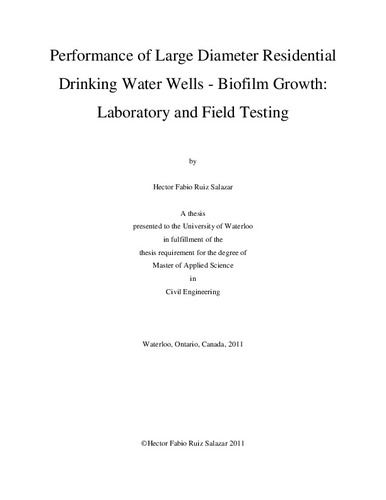 In the first phase of this project three enhanced large diameter (> 60 cm) residential wells were constructed at a study site in Lindsay, Ontario. Two wells were constructed using concrete tile casing while the other well was constructed using galvanized steel casing. Javor (2010) evaluated various aspects of drinking water well construction and design to determine the susceptibility of residential large diameter drinking water wells to surface water and airborne contamination. One of the purposes of these new installations was to remove the uncertainty with respect to construction methods, age and maintenance that is characteristic of residential drinking water well performance studies. Javor (2010) conducted a field and laboratory study to assess the performance of several design changes that were thought to improve the integrity of large diameter drinking water wells. These experiments were also used to determine whether one design was more prone to atmospheric and/or surface water contamination than another. During the second phase of this project routine monitoring was continued and data pertinent to assess the performance of the test wells were collected using the same instrumentation. This routine monitoring involved the visual inspection of the wells, collection of well water elevation, collection of soil temperature profile data, collection and analysis of water samples, and collection of cumulative water volumes extracted from the test wells. In addition to the routine monitoring, a ground penetrating radar (GPR) survey was performed in October 2010 to complement the previous data collected during February 2010. Smoke tracer tests were performed under non-frozen and frozen conditions to re-assess the potential pathways of contaminants between the atmosphere and the interior of the test wells. Bacteriological indicators and high concentrations of two dissolved ions were detected in all test and monitoring wells. The smoke tracer tests demonstrated that pathways for airborne contaminants to enter the test wells exist with similar pathways observed in the winter and the summer. GPR surveys indicated that the bentonite slurry annular sealant was the most homogeneous media. A baseline characterization of the microbial nature of the biofilm performed in three of the test wells (CTH1, ETH1 and ETH3) indicated that the sessile bacteria are more metabolically diverse than suspended bacteria, and that this diversity is even higher in the concrete cased wells. Biofilm characterization performed on concrete, fibreglass and galvanized steel coupons incubated in two of the test wells (concrete and galvanized steel) showed that bacteria in the concrete cased wells barely colonized on fiberglass and galvanized steel, while bacteria in the galvanized steel cased well did not have difficulty colonizing on any of the casing materials. The results of the biofilm cleaning study indicated that the use of pressure washing combined with chlorination effectively removed biofilm grown on galvanized steel and fibreglass casing materials. This study investigated various factors that could affect the performance of large diameter drinking water wells. Since the test wells used in this study were under the direct influence of surface water a comparison between the various annular sealants was problematic. However, the three enhanced test wells outperformed the conventional test well. The observations from the smoke tracer tests performed under non-frozen and frozen conditions indicate that the Poly-Lok lid seam is the most prevalent pathway for airborne contaminants to enter a well. Fibreglass may be the preferred choice for large diameter well casing material since fibreglass is corrosion resistant, lightweight, easy to install, has a high strength to weight ratio, and a greater degree of biofilm was able to be removed from fibreglass casing material than from galvanized steel casing material.