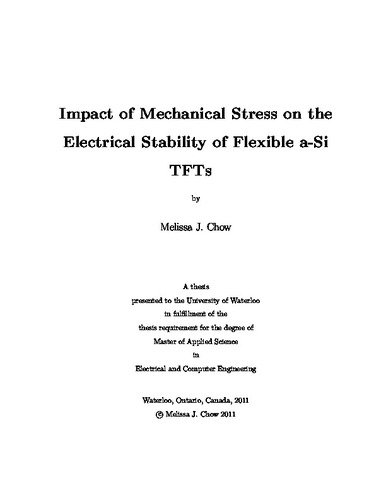 The development of functional flexible electronics is essential to enable applications such as conformal medical imagers, wearable health monitoring systems, and flexible light-weight displays. Intensive research on thin-film transistors (TFTs) is being conducted with the goal of producing high-performance devices for improved backplane electronics. However, there are many challenges regarding the performance of devices fabricated at low temperatures that are compatible with flexible plastic substrates. Prior work has reported on the change in TFT characteristics due to mechanical strain, with especially extensive data on the effect of strain on field-effect mobility. This thesis investigates the effect of gate-bias stress and elastic strain on the long-term stability of flexible low-temperature hydrogenated amorphous silicon (a-Si:H) TFTs, as the topic has yet to be explored systematically. An emphasis was placed on bias-stress measurements over time in order to obtain information on the physical mechanisms of instability. Drain current was measured over various intervals of time to track the degradation of devices due to metastability, and results were then compared across devices of various sizes under tensile, compressive, and zero strain. Transfer characteristics of the TFTs were also measured under the different conditions, to allow for extraction of parameters that would provide insight into the instability mechanisms. In addition to parameter extraction, the degradation and recovery of TFT output current was quantitatively compared for various bias-stress times across the different levels of strain. Finally, the instability mechanisms are modelled with a Markov system to further examine the effect of strain on long-term TFT operation. From the analysis of results, it was found that shallow charge trapping in the dielectric is the main mechanism of instability for short bias stress times, and did not seem to be greatly affected by strain. For longer bias stress times of over 10000 seconds, defect creation in the a-Si:H becomes a more significant contributor to instability. Both tension and compression increased defect creation compared to TFTs with zero applied strain. Compression appeared to cause the greatest increase in the rate of defect formation, likely by weakening Si-Si bonds in the a-Si:H. Tension appeared to cause a less significant increase, possibly due to a strengthening of some proportion of the Si-Si bonds caused by the slight elongation of bond length or because the applied tension relieves intrinsic compressive stress in a-Si:H film. A longer conduction path and greater dielectric area appears to increase the bias-stress and strain-related effects. Therefore reducing device size should increase the reliability of flexible TFTs.