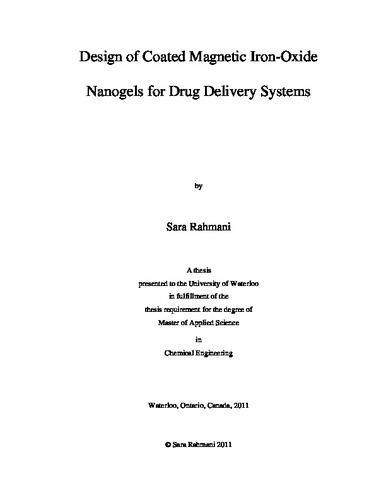 Intelligent and more advanced therapeutic agents, capable of sensing and responding to their environment, are required to treat more complicated and complex diseases. Among all recently developed therapeutic agents, hydrogels are not only intelligent to sense and respond to external stimulus, but also they can be synthesized and designed in the cellular and sub-cellular size scale, which enhance their therapeutic ability. Most body physiological processes are regulated as a consequence of pH gradient in different compartments of the body; besides, changes in pH are also associated with disease or damaged sites within the body. A unique feature of hydrogels is that they can provide a network for loading and release of drugs. Therefore, the drug loaded within pH-responsive nanogels are able to locally release onto the target sites because of their small size, and capability to sense and respond to environmental changes. The goal of this research is to design and implement novel pH-responsive magnetic nanogels for drug delivery that respond to changes in pH. Semi-continuous emulsion polymerization was conducted to synthesize polyampholyte nanogels comprising of methacrylic acid (MAA) and 2-(diethylamino) ethyl methacrylate (DEAEMA) in the presence and absence of steric stabilizer poly (ethylene glycol) methacrylate (PEGMA). The synthesized nanogels demonstrated swelling behavior at both acidic and basic pHs. Herein, procaine hydro chloride (PrHy) was utilized as cationic drug to investigate the release behavior from synthesized nanogels under different conditions. PrHy was loaded within nanogels through hydrophobic interaction and hydrogen bonding, as confirmed by isothermal titration calorimetry. The release study of PrHy molecules from nanogels was conducted by applying the versatile and easy technique of drug selective electrode, in which the concentration of released drug was measured as a function of time. In order to facilitate the purification and enhance the detection of nanogels, iron oxide particles (Fe3O4) were co-precipitated within nanogels to form magnetic nanogels. Subsequently, layer-by-layer coating of polyelectrolytes were performed to control and eliminate the initial burst release of PrHy from nanogel by increasing the diffusion barrier and manipulating the permeability of nanogels. For the purpose of this research low molecular weight chitosan (CS) was used as polycation and poly (sodium 4-styrenesulfonate) (PSS) was acted as polyanion to coat magnetic nanogels. The more layers was applied, the more reduction in burst release was observed, which was revealed by using drug selective electrode to measure the concentration of the released drug from coated nanogels. Besides, layer-by-layer coating prolonged the time require to reach the steady state drug release. Therefore, this synthesized polyampholyte coated iron-oxide nanogels demonstrate great potential for use in controlled drug delivery systems.