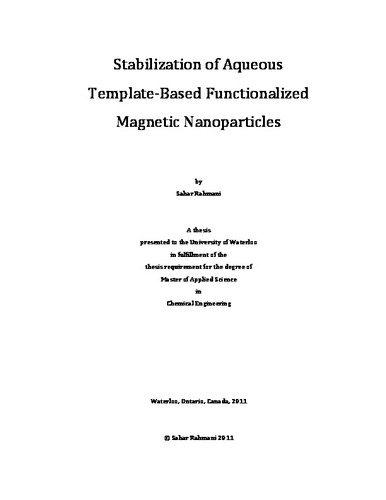 Magnetic particles have attracted increasing attention in fields ranging from separation processes to electromagnetic information storage an medical application. Various approaches for their synthesis have been developed and studied to satisfy the criteria of production. Improvement and optimization of size, stability, and functionality is of vital importance in biological applications. The main aspect of project, initially, was to study the application of aqueous functionalized magnetic nanoparticles coupled with high gradient magnetic separation technique for the removal of trace residue of organic contaminants from drinking water. However, the importance of synthesizing stable ferrofluid for this purpose became clear later and took precedence over the initial objective. Different approaches were adopted, such as the incorporation of poly(ethylene glycol) methacrylate, ethylenediamine, and chitosan, to enhance the stability of magnetic particles. However, these surface modifications had unfavorable effect on the stability of initial particles. In accord with the initial objective of the project, the possibility of utilization of β-cyclodextrin, as organic pollutant entrapment agent, was investigated in preliminary studies conducted on its interaction with a model compound, procaine hydrochloride. The outcomes of these experiments suggest its potential as a biocompatible removal agent for the elimination of organic pollutant in drinking water system, or other applications that require selective separation of organic compounds.