Simulating lake dynamics: the effects of bathymetry and bottom drag 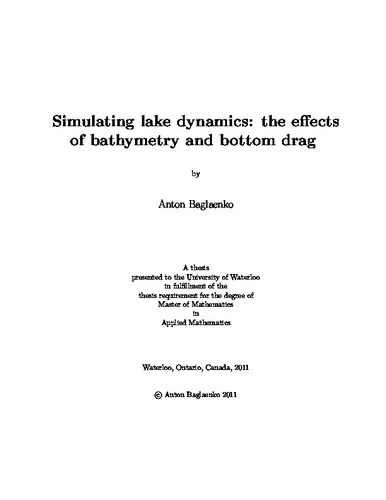 This work seeks, through numerical simulations as well as analysis, to derive from relatively simple models an intuitive understanding of the dynamics and behaviour of flow in lakes near the bottom boundary. The main body is divided into two equally important sections, the analysis and simulation of the effects of nonlinear (quadratic) bottom drag on the flow, and the simulation of the effects of topography on lake dynamics as it relates to the redistribution of sediment from the lakebed. The simulations all follow a structured scheme, beginning with relatively simple one-dimensional models to build intuition and proceeding to full two-dimensional simulations using the weakly nonhydrostatic shallow water equations. Thus this work seeks to build an understanding of the behaviour of the modified shallow water equations (a good representation of lake behaviour) and to analyze the effects of nonlinear drag and bottom topography on these systems. The nonlinear drag chapters demonstrate that the addition of a nonlinear friction term, while very efficient at removing energy from the system, also causes interesting new behaviour. In the pendulum (a good one dimensional analogy to the shallow water equations) the presence of nonlinear drag alters the parameter space enough to induce or destroy chaotic behaviour. A phenomenon worth considering in relation the shallow water equations. Additionally, the presence of drag causes as a cascade in spectral space, similar to the classical turbulent cascade. This work considers this effect and seeks to differentiate it from the turbulent cascade wherever and whenever possible. The final section of the thesis deals with the presence and effects of bottom topography (namely protrusions from the lake bed) on wave velocities due to a basin-scale seiche. This section examines both the dynamics of the system, through deflection about topography and the modification of the wave due to nonlinearity and bathymetry, as well as the relationship between lake dynamics and sediment redistribution. Finally, possible future directions are suggested as natural extensions to the work already done, as well as more sophisticated numerical models which could provide further insight into the problems discussed herein.