The City and the Stream: Impacts of Municipal Wastewater Effluent on the Riffle Food Web in the Speed River, Ontario 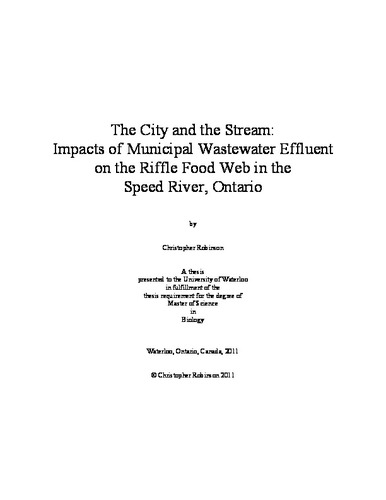 Fast paced population growth in urban areas of southern Ontario is putting increased pressure on the surrounding aquatic environment. The City of Guelph uses the Speed River to assimilate its municipal wastewater effluent. With a projected 57% population increase in the watershed by 2031, the assimilative capacity of the river may be challenged in the coming years. The Guelph Wastewater Treatment Plant uses tertiary treatment methods greatly reducing ammonia, suspended solids and phosphate concentrations in the effluent. However there are still impacts detectable related to excessive nutrients released into this relatively small river (6th order) which promotes algae and aquatic macrophyte growth. There is also concern about a variety of emerging contaminants that may enter the river and impact the health of the ecosystem. The research in this thesis examined the seasonal and spatial variability and extent of the impacts of the wastewater effluent on the riffle fish communities in the Speed River. Stable isotope signatures (δ13C and δ15N) were used to understand the changes in the dominant benthic fish species, Rainbow Darters (Etheostoma caeruleum) and Greenside Darters (E. blennioides), relative to changes in invertebrate signatures and their abundance. Rainbow Darters were extremely abundant relative to Greenside Darters at the site immediately downstream of the effluent outfall, particularly in August. The benthic invertebrate community was distinctly different downstream of the effluent outfall, especially in the summer, with a reduced abundance of Elmidae beetle larvae and increased abundance of isopods (Caecidotea intermedius) compared to upstream. δ13C and δ15N of the two darters species were similar at all sites in May and July, but in August and October Rainbow Darter signatures were more enriched in the two heavier isotopes at sites downstream of the effluent outfall. The vast majority of invertebrate taxa sampled were also enriched at the downstream sites. An analysis of Rainbow and Greenside Darter stomach contents revealed that Rainbow Darters incorporated more isopods and other invertebrates in their diet, especially at the immediate downstream sites suggesting that they are more adaptable to the altered downstream environment. The feeding habits of Greenside Darters appear to change between July and August in response to changes in habitat and food availability. They are potentially consuming food organisms with less enriched isotopic signatures, which results in their isotopic signatures not rising during these months like most of the invertebrates and other fish. Alternatively, the Greenside Darters may move across the stream to feed on invertebrates that remain unexposed to the wastewater effluent. These impacts, although subtle, may be a reflection of the Speed River ecosystem being compromised by nutrient inputs from the wastewater effluent. With the impending increase in demand on the treatment plant (e.g., population growth), ongoing treatment and infrastructure improvements may be needed in the future to maintain the current ecosystem structure.

Chris Robinson (2011). The City and the Stream: Impacts of Municipal Wastewater Effluent on the Riffle Food Web in the Speed River, Ontario. UWSpace. http://hdl.handle.net/10012/6382