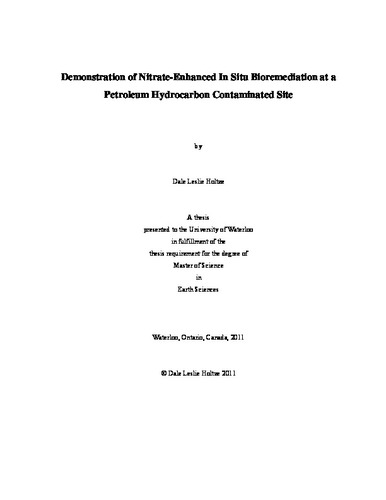 Alternative strategies involving in situ remediation technologies have been developed to assist with property clean up, however, cost-effectiveness and discrepancies in success rates and timeliness continue. The objective of my research was to critically demonstrate the application and usefulness of an in situ remediation technology at a petroleum hydrocarbon impacted site. This project was proposed as part of the research programs: Groundwater Plume Formation and Remediation of Modern Gasoline Fuels in the Subsurface and Enhancing In Situ Bioremediation at Brownfield Sites funded by the Ontario Centres of Excellence for Earth and Environmental Technologies as part of the multiphase project entitled “Enhancing in situ Bioremediation at Brownfield Sites”. This research focused on the demonstration of nitrate-enhanced in situ bioremediation at a decommissioned service station. Petroleum hydrocarbon impacted soil and groundwater is a common occurrence at gasoline distribution facilities, where toxicological effects are known for gasoline constituents of interest such as benzene, toluene, ethylbenzene and total xylenes (BTEX). These chemicals are volatile, readily soluble, and persistent in groundwater. In particular, residual contaminants present in the saturated zone were targeted for remediation as they serve as a long term source of contamination and contribute to mobile vapour phase and dissolved phase plumes. Site investigations characterized the complex hydrogeological conditions and contaminant distribution present in order to effectively design an in situ bioremediation treatment system. The addition of nitrate as a terminal electron acceptor (TEA) to an aquifer enhances in situ biodegradation of petroleum hydrocarbons, by providing the microbes with a sustainable energy source to promote cell maintenance and growth of the microbial population. The remediation strategy involved pulsed injections of remedial solution amended with a conservative bromide (200 mg/L Br-) and reactive nitrate (90 to 265 mg/L NO3-) tracers with the purpose of providing a continuous supply of TEA available to the indigenous microbial populations. Nitrate was selected as an alternative electron acceptor over the thermodynamically favoured O2 because of typical challenges encountered using O2 in bioremediation applications in addition to the existing anaerobic environment. In situ anaerobic degradation of BTEX compound using TEA amendments has been well documented; however benzene is often recalcitrant under denitrification conditions. The results of the Br- tracer breakthrough curves indicate that different preferential flow pathways were established under the transient saturated conditions present at the Site, although the behaviour of the injected remedial slug was generally consistent between the different units and the test solution was ultimately delivered to the target zone. The delivery of the remedial test solution was greatly influenced by the hydrogeological conditions present at the time of injection. The injectate was preferentially transported in the high permeability zone of sandy gravel aquifer Unit 3 under high saturated condition and background hydraulic gradients. However the seasonal decline in groundwater levels and hydraulic gradients resulted in the lower portion of Unit 4 comprised of higher permeable materials being able to transmit the test solution more effectively. Given the variable hydrogeological conditions present at the Site influenced by seasonal effects, the delivery of the remedial solution to target zones containing petroleum hydrocarbons at residual saturation is more effective under reduced saturated conditions. The delivery of TEA amended water to enhance the in situ biodegradation of petroleum contaminants is more effective when the treatment water has an increased residence time in the target remedial zone, attributed to low gradients and groundwater transport velocities at the Site. Longer residence periods enable the indigenous microbes to have increased contact time with the TEA which will be preferentially utilized to degrade the contaminants.   A reducing zone enriched with TEA in the anaerobic aquifer was established following consecutive injections of remedial test solution. A cumulative mass of 4 kg of NO3- was added to the target aquifer during the course of the remedial injections. Evidence demonstrating NO3- utilized as a terminal electron acceptor in the bioremediation of the petroleum-contaminated aquifer include: laboratory microcosm study confirming local indigenous microbial population’s ability to degrade hydrocarbons using NO3- as the TEA in addition to observed decrease in NO3- relative to a conservative Br- tracer and generation of nitrite, an intermediate product in denitrification in the pilot-scale operation. Contaminant mass removal likely occurred as Br- tracer evidence indicates that NO3- was utilized in the study area based on the inference of denitrification rates. Post-injection groundwater sampling indicate declining concentrations of toluene, however long term monitoring is recommended in order to evaluate the success of the remediation activity and assess the potential for rebound. Post-injection soil core results are unable to demonstrate the reduction in individual toluene, let alone BTEXTMB hydrocarbon levels, as a result of insufficient quantities of nitrate delivered to the target zone relative to the significant but heterogeneously distributed residual mass in the subsurface.