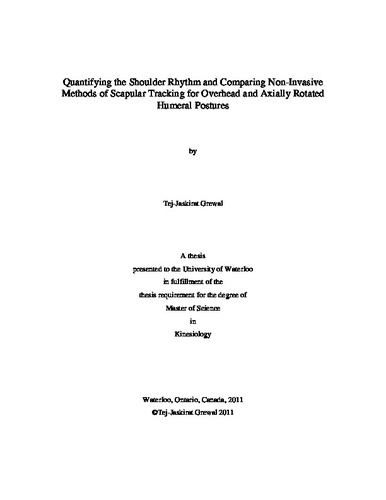 The present research quantified the shoulder rhythm for arm postures that represent the right-handed reachable workspace and compared 3 methods of scapular tracking: acromion marker cluster (AMC), stylus and scapular locator. The shoulder rhythm models can be incorporated into existing and future shoulder biomechanical models to determine shoulder geometry when simulating postures experienced in workplaces and thus have ergonomic implications for correctly identifying risk factors. The results of this research also provide guidance for future studies involving scapular tracking. Fourteen male and 14 female participants performed static arm postures spread over 5 elevation angles: 0, 45, 90, 135, 180 degrees, three elevation planes: 0, 45, 90 degrees to the frontal plane and, three axial rotations: maximum internal, neutral, and maximum external rotation. Kinematic data was recorded using a Vicon MX20+ motion-tracking system. Bone rotations were calculated using Euler angles and continuous prediction models were generated to estimate scapular and clavicular orientations based primarily on thoracohumeral relative orientations. Methods of scapular tracking were compared using repeated measures analysis of variance. Participant characteristics did not influence any of the scapular or the clavicular angles (p>.05). Axial rotation did not influence scapular retraction/protraction and elevation plane did not influence clavicular elevation (p>.05). Elevation angle was the largest contributor to lateral rotation and posterior tilt of the scapula and all clavicular angles. Plane of elevation was the largest contributor to scapular protraction. Using the stylus as the gold standard, the locator and the AMC underestimated lateral rotation, with a maximum difference of 11 degrees and 9 degrees between the locator and the stylus and AMC and the stylus measurements, respectively. The AMC and the locator overestimated posterior tilt at overhead postures and underestimated it at low elevation angles. The maximum difference between the AMC- and the locator- and the stylus-measured tilt was 10 degrees. The scapular locator consistently overestimated protraction by approximately 5 degrees. The AMC underestimated protraction in the frontal plane at low elevation angle but overestimated it at all other postures and the overestimation increased with plane of elevation, internal rotation and elevation angle. Overall, it is recommended to use AMC rather than the scapular locator to measure scapular position.