Study on the Nano-structured Materials for Energy Storage System 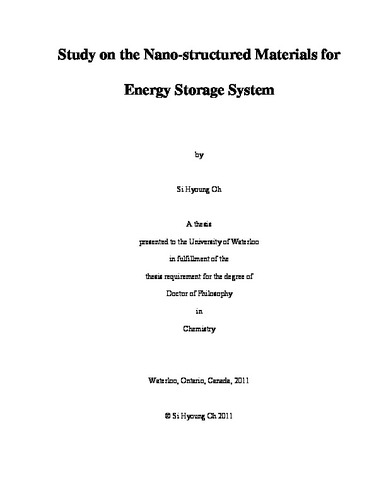 The Li-oxygen cell is an emerging energy storage system which has a great promise in the near future for its high energy density and use of free oxygen available from the air. This energy system is attractive since it has nine times higher energy density than conventional lithium-ion cells based on LiCoO2 and graphite. However, this deceptively simple system poses many challenges which must be overcome before it could be considered for any practical application. Firstly, the formation of the insulating and insoluble reaction product, lithium peroxide, requires the highly porous, yet electronically well percolated cathode structure for the reasonable performance. Secondly, the decomposition of lithium peroxide usually involves the huge anodic overpotential which requires the development of highly efficient catalyst. Thirdly, a proper electrolyte system should be developed which is resistant to both the superoxide attack during the discharge reaction and the highly oxidizing environment during the charge process where both oxygen radicals and catalysts are present. Lastly, protection of the lithium anode is necessary, otherwise oxygen radicals in the solvent will react with lithium metal spontaneously, which eventually increases the impedance and more importantly depletes lithium metal from the anode. This thesis is primarily focused on the development of highly efficient catalysts for oxygen reduction and oxygen evolution reactions for the rechargeable Li-oxygen battery. To this end, a highly porous and electrically networked cathode film was manufactured by utilizing common plasticizers as pore forming agents and a Li-oxygen testing cells were developed using Swagelok fittings. The Li-oxygen cell test in two different electrolyte systems shows that the reactivity of electrolyte system to superoxide radicals is a key parameter to determine the nature of reaction product. For LiBOB/PC system, both LIBOB and PC are actively decomposed by superoxide radicals to produce lithium oxalate and lithium carbonate as main discharge products. In the case of LiPF6/TEGDME system, both salt and solvent are stable and thus ideal discharge product, lithium peroxide is obtained. Lead ruthenate and bismuth ruthenate with the extended pyrochlore structure show an excellent catalytic activity by increasing discharge capacity and lowering the anodic overpotential considerably during charge process in both electrolyte systems. They reduce the decomposition of electrolyte system and the extent of carbon corrosion, which accounts for more efficient cycling. The excellent catalytic activity of these pyrochlores originates from their intrinsic oxygen vacancies, electronic conductivity and many surface active sites afforded by its morphology. The performance of this catalyst was further increased through gold deposition on the pyrochlore surface, resulting in much increased discharge capacity. The pyrochlore coated carbon was proposed as a type of catalyst for an efficient way to reduce the amount of catalyst and enhance homogenous mixing with other components. The investigation on the lithium peroxide decomposition mechanism shows that carbon corrosion which occurs at around 4.0 V by lithium peroxide makes further decomposition difficult without a catalyst. In the presence of catalyst, almost full decomposition of lithium peroxide occurs with a lowered decomposition potential even though carbon corrosion still occurs. This gives a hint that the generation of a nano-porous structure and the homogenous distribution of catalyst over these pores are very important, as well as use of a highly efficient catalyst for lowering activation overpotentials. In conclusion, although there are still many obstacles present, as listed above, for the commercial application of Li-oxygen cell, these hurdles are surmountable in the near future by intensive research and the results shown in this thesis can be a cornerstone for further research. Supercapacitors based on metal oxide are new energy storage devices for ultrafast charging and discharging with decent energy density over hundreds of thousands of cycles for many commercial electronic devices and power tools. The surface redox nature of these reactions requires the creation of high surface area for better utilization and performance. Hydrous ruthenium dioxide is one of the most attractive supercapacitor materials owing to its high pseudo-capacitance and metallic character, which facilitate fast electron movement. In this thesis, a simple process involving soft liquid crystal templating using cationic surfactant and gentle heat-treatment in the mild temperature was developed to prepare mesoporous ruthenium oxide with a quasi-crystalline wall character, which has a high surface area and controlled water contents in the structure. The electrochemical testing results exhibited a promising performance of high gravimetric capacitance and a good rate capability facilitated by high surface area as well as porous structure.