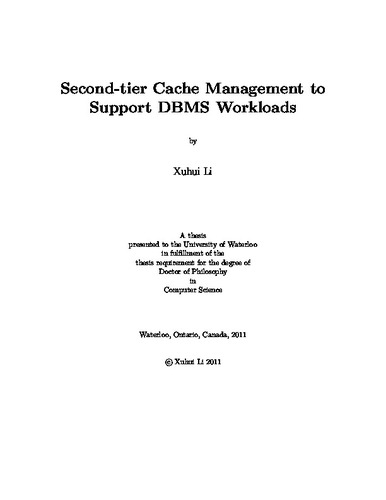 Enterprise Database Management Systems (DBMS) often run on computers with dedicated storage systems. Their data access requests need to go through two tiers of cache, i.e., a database bufferpool and a storage server cache, before reaching the storage media, e.g., disk platters. A tremendous amount of work has been done to improve the performance of the first-tier cache, i.e., the database bufferpool. However, the amount of work focusing on second-tier cache management to support DBMS workloads is comparably small. In this thesis we propose several novel techniques for managing second-tier caches to boost DBMS performance in terms of query throughput and query response time. The main purpose of second-tier cache management is to reduce the I/O latency endured by database query executions. This goal can be achieved by minimizing the number of reads and writes issued from second-tier caches to storage devices. The rst part of our research focuses on reducing the number of read I/Os issued by second-tier caches. We observe that DBMSs issue I/O requests for various reasons. The rationales behind these I/O requests provide useful information to second-tier caches because they can be used to estimate the temporal locality of the data blocks being requested. A second-tier cache can exploit this information when making replacement decisions. In this thesis we propose a technique to pass this information from DBMSs to second-tier caches and to use it in guiding cache replacements. The second part of this thesis focuses on reducing the number of writes issued by second-tier caches. Our work is two fold. First, we observe that although there are second-tier caches within computer systems, today's DBMS cannot take full advantage of them. For example, most commercial DBMSs use forced writes to propagate bufferpool updates to permanent storage for data durability reasons. We notice that enforcing such a practice is more conservative than necessary. Some of the writes can be issued as unforced requests and can be cached in the second-tier cache without immediate synchronization. This will give the second-tier cache opportunities to cache and consolidate multiple writes into one request. However, unfortunately, the current POSIX compliant le system interfaces provided by mainstream operating systems e.g., Unix and Windows) are not flexible enough to support such dynamic synchronization. We propose to extend such interfaces to let DBMSs take advantage of using unforced writes whenever possible. Additionally, we observe that the existing cache replacement algorithms are designed solely to maximize read cache hits (i.e., to minimize read I/Os). The purpose is to minimize the read latency, which is on the critical path of query executions. We argue that minimizing read requests is not the only objective of cache replacement. When I/O bandwidth becomes a bottleneck the objective should be to minimize the total number of I/Os, including both reads and writes, to achieve the best performance. We propose to associate a new type of replacement cost, i.e., the total number of I/Os caused by the replacement, with each cache page; and we also present a partial characterization of an optimal algorithm which minimizes the total number of I/Os generated by caches. Based on this knowledge, we extend several existing replacement algorithms, which are write-oblivious (focus only on reducing reads), to be write-aware and observe promising performance gains in the evaluations.