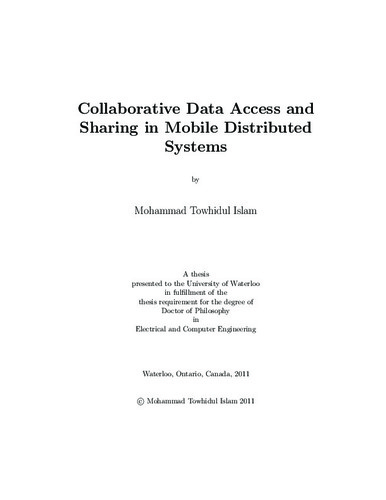 The multifaceted utilization of mobile computing devices, including smart phones, PDAs, tablet computers with increasing functionalities and the advances in wireless technologies, has fueled the utilization of collaborative computing (peer-to-peer) technique in mobile environment. Mobile collaborative computing, known as mobile peer-to-peer (MP2P), can provide an economic way of data access among users of diversified applications in our daily life (exchanging traffic condition in a busy high way, sharing price-sensitive financial information, getting the most-recent news), in national security (exchanging information and collaborating to uproot a terror network, communicating in a hostile battle field) and in natural catastrophe (seamless rescue operation in a collapsed and disaster torn area). Nonetheless, data/content dissemination among the mobile devices is the fundamental building block for all the applications in this paradigm. The objective of this research is to propose a data dissemination scheme for mobile distributed systems using an MP2P technique, which maximizes the number of required objects distributed among users and minimizes to object acquisition time. In specific, we introduce a new paradigm of information dissemination in MP2P networks. To accommodate mobility and bandwidth constraints, objects are segmented into smaller pieces for efficient information exchange. Since it is difficult for a node to know the content of every other node in the network, we propose a novel Spatial-Popularity based Information Diffusion (SPID) scheme that determines urgency of contents based on the spatial demand of mobile users and disseminates content accordingly. The segmentation policy and the dissemination scheme can reduce content acquisition time for each node. Further, to facilitate efficient scheduling of information transmission from every node in the wireless mobile networks, we modify and apply the distributed maximal independent set (MIS) algorithm. We also consider neighbor overlap for closely located mobile stations to reduce duplicate transmission to common neighbors. Different parameters in the system such as node density, scheduling among neighboring nodes, mobility pattern, and node speed have a tremendous impact on data diffusion in an MP2P environment. We have developed analytical models for our proposed scheme for object diffusion time/delay in a wireless mobile network to apprehend the interrelationship among these different parameters. In specific, we present the analytical model of object propagation in mobile networks as a function of node densities, radio range, and node speed. In the analysis, we calculate the probabilities of transmitting a single object from one node to multiple nodes using the epidemic model of spread of disease. We also incorporate the impact of node mobility, radio range, and node density in the networks into the analysis. Utilizing these transition probabilities, we construct an analytical model based on the Markov process to estimate the expected delay for diffusing an object to the entire network both for single object and multiple object scenarios. We then calculate the transmission probabilities of multiple objects among the nodes in wireless mobile networks considering network dynamics. Through extensive simulations, we demonstrate that the proposed scheme is efficient for data diffusion in mobile networks.