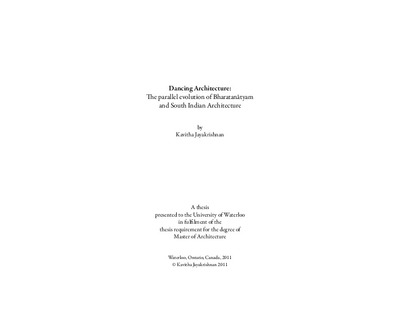 In her book, "Indian Classical dance", Kapila Vatsyayan describes dance as the highest order of spiritual discipline, the enactment of which is symbolic of a ritual sacrifice of one's being to a transcendental order. The Natya-Shashtra, a treatise on drama and dance, reveals the status of the performing arts as equal to prayer and sacrificial rites in the pursuit of moksha, the release form cycles of rebirth. Both dance and dancer function as a vehicle for divine invocation and are mirrored in the architectural surroundings. To investigate this connection between dance and place, it is imperative to understand the mythical origins of architecture and temple dance. the Hindu philosophy of the cosmic man and its religious relationship with the Dravidian architecture of Tamil Nadu is the starting point of the discussion of a south Indian aesthetic. The Vastu-purusha mandala is a philosophical diagram that provides a foundation for Hindu aesthetics, linking physical distance, religious position and universal scale in both time and space. Used as an architectural diagram, it becomes a mediator between the human body and the cosmos. The temple, as a setting for dance performances, and constructed based on the mandala, shares this quality of immersing its participants into a multi-sensory spatial experience. However, while the link between architecture and dance culture was explicit up to the 18th century, it is less compelling in the context of modern south Indian architecture. With an increasingly unstable political landscape during the 20th century, architectural growth in south India during this period is almost stagnant. Unfortunately, this creates a break in the continuity and comparative evolution of dance and architecture, leading to the fragmentation and abstraction of dance in its modern form. South Indian dance has since transformed into a prominent cultural symbol and various incarnations of the dancer have become the isolated yet important link, between tradition and modernity. As an evolving living embodiment of contemporary culture and identity, her transformation from Devadasi, to an icon of nationalism, to a choreographer of 'high art' provides the foundation for the reintegration of architecture in the cultural fabric. The culmination of this research aims to reinstate the importance of architecture as a cultural nexus in order to restring a fragmented dance, community and cultural identity.