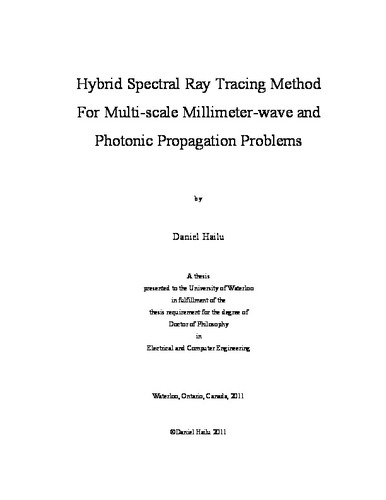 This thesis presents an efficient self-consistent Hybrid Spectral Ray Tracing (HSRT) technique for analysis and design of multi-scale sub-millimeter wave problems, where sub-wavelength features are modeled using rigorous methods, and complex structures with dimensions in the order of tens or even hundreds of wavelengths are modeled by asymptotic methods. Quasi-optical devices are used in imaging arrays for sub-millimeter and terahertz applications, THz time-domain spectroscopy (THz-TDS), high-speed wireless communications, and space applications to couple terahertz radiation from space to a hot electron bolometer. These devices and structures, as physically small they have become, are very large in terms of the wavelength of the driving quasi-optical sources and may have dimension in the tens or even hundreds of wavelengths. Simulation and design optimization of these devices and structures is an extremely challenging electromagnetic problem. The analysis of complex electrically large unbounded wave structures using rigorous methods such as method of moments (MoM), finite element method (FEM), and finite difference time domain (FDTD) method can become almost impossible due to the need for large computational resources. Asymptotic high-frequency techniques are used for analysis of electrically large quasi-optical systems and hybrid methods for solving multi-scale problems. Spectral Ray Tracing (SRT) has a number of unique advantages as a candidate for hybridization. The SRT method has the advantages of Spectral Theory of Diffraction (STD). STD can model reflection, refraction and diffraction of an arbitrary wave incident on the complex structure, which is not the case for diffraction theories such as Geometrical Theory of Diffraction (GTD), Uniform theory of Diffraction (UTD) and Uniform Asymptotic Theory (UAT). By including complex rays, SRT can effectively analyze both near-fields and far-fields accurately with minimal approximations. In this thesis, a novel matrix representation of SRT is presented that uses only one spectral integration per observation point and applied to modeling a hemispherical and hyper-hemispherical lens. The hybridization of SRT with commercially available FEM and MoM software is proposed in this work to solve the complexity of multi-scale analysis. This yields a computationally efficient self-consistent HSRT algorithm. Various arrangements of the Hybrid SRT method such as FEM-SRT, and MoM-SRT, are investigated and validated through comparison of radiation patterns with Ansoft HFSS for the FEM method, FEKO for MoM, Multi-level Fast Multipole Method (MLFMM) and physical optics. For that a bow-tie terahertz antenna backed by hyper-hemispherical silicon lens, an on-chip planar dipole fabricated in SiGe:C BiCMOS technology and attached to a hyper-hemispherical silicon lens and a double-slot antenna backed by silica lens will be used as sample structures to be analyzed using the HSRT. Computational performance (memory requirement, CPU/GPU time) of developed algorithm is compared to other methods in commercially available software. It is shown that the MoM-SRT, in its present implementation, is more accurate than MoM-PO but comparable in speed. However, as shown in this thesis, MoM-SRT can take advantage of parallel processing and GPU. The HSRT algorithm is applied to simulation of on-chip dipole antenna backed by Silicon lens and integrated with a 180-GHz VCO and radiation pattern compared with measurements. The radiation pattern is measured in a quasi-optical configuration using a power detector. In addition, it is shown that the matrix formulation of SRT and HSRT are promising approaches for solving complex electrically large problems with high accuracy. This thesis also expounds on new measurement setup specifically developed for measuring integrated antennas, radiation pattern and gain of the embedded on-chip antenna in the mmW/ terahertz range. In this method, the radiation pattern is first measured in a quasi-optical configuration using a power detector. Subsequently, the radiated power is estimated form the integration over the radiation pattern. Finally, the antenna gain is obtained from the measurement of a two-antenna system.