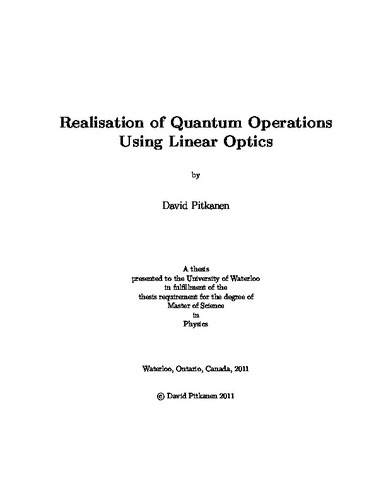 The main topic of this thesis is linear optics and the implementation of quantum operations (measurements, quantum channels, and unitary rotations) on optical systems. In the opening chapter the basic notions needed to understand the rest of the thesis will be explained. These notions include defining a quantum state, measurement, quantum channel and the linear optics tool set. The work in this thesis takes both fundamental and practical approaches to studying linear optical networks. For instance in the first chapter a proof is provided that shows that any unitary on a single mode Fock state can be realised with linear optics. The proof is constructive, however the approach to realising the unitary is not suitable for experimental implementation because it requires complicated ancilla states. As in the KLM proposal the procedure works only stochastically however by allowing the size of the ancilla to grow the probability of failure can be made arbitrarly small. Furthermore we investigate the realisation of arbitrary channels in a specific encoding that we call a $d$-rail encoding. The only ancilla state that we allow is a vacuum ancilliary state and further restrictions were considered (e.g. photon counting). A proof is provided that using these resources only random unitaries can be applied deterministically using linear optics. An expression for the optimal probability of success for realising more general channels with these resources is also discussed. As a final topic we also investigate the realisation of a quantum non-demolition measurement onto the dual rail qubit space. The investigation is a blend of both fundamental and practical approaches. To begin we employ a modified KLM-like procedure and show that the scheme can be realised perfectly but stochastically. The probability that the proper measurement is made can be made arbitrarly close to one using a suitably large ancilla state. In addition we consider an existing scheme \cite{gisin10a} which uses practical sources (two single photon sources) to perform the measurement. The scheme does not realise the true measurement but instead has a free parameter in it which is the transmittiviy of a beamsplitter. The measurement will project onto a space that has a vacuum component. By adjusting the transmittivity of this beamsplitter the vacuum component can be made arbitrarly small but only at the expense of the probability of success of the procedure. In this thesis a modification that can be made to eliminate the vacuum component without changing the sources is introduced. The modification is surprisingly simple and only involves the addition of a single beamsplitter. In the proposal for the original amplifier it was used in simulations for DIQKD that included device imperfections. To show the improvement of our modification these DIQKD simulations are reproduced using the modified amplifier and its results are compared to the results of the original amplifier.