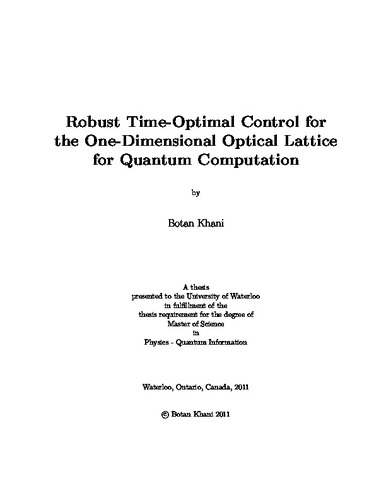 Quantum information is a growing field showing exciting possibilities for computational speed-up and communications. For the successful implementation of quantum computers, high-precision control is required to reach fault-tolerant thresholds. Control of quantum systems pertains to the manipulation of states and their evolution. In order to minimize the effects of the environment on the control operations of the qubits, control pulses should be made time-optimal. In addition, control pulses should be made robust to noise in the system, dispersion in energies and coupling elements, and uncertain parameters. In this thesis, we examine a robust time-optimal gradient ascent technique which is used to develop controls of the motional degrees of freedom for an ensemble of neutral atoms in a one-dimensional optical lattice in the high dispersion regime with shallow trapping potentials. As such, the system is analyzed in the delocalized basis. The system is treated as an ensemble of atoms with a range of possible quasimomenta across the first Brillouin zone. This gives the ensemble of Hamiltonians, indexed by the quasimomenta, a distinct spectra in their motional states and highly inhomogeneous control Hamiltonians. Thus, the optical lattice is seen as a model system for robust control. We find optimized control pulses designed using an ensemble modification of gradient-ascent pulse engineering robust to any range of quasimomentum. We show that it is possible to produce rotation controls with fidelities above 90\% for half of the first Brillouin zone with gate times in the order of several free oscillations. This is possible for a spectrum that shows upwards of 75\% dispersion in the energies of the band structure. We also show that NOT controls for qubit rotations on the entire Brillouin zone fidelities above 99\% were possible for 0.6\% dispersion in energies. The gate times were also in the order of several free oscillations. It is shown that these solutions are palindromic in time due to phase differences in some of the energy couplings when comparing one half of the Brillouin zone to another. We explore the limits of discretized sampling of a continuous ensemble for control.