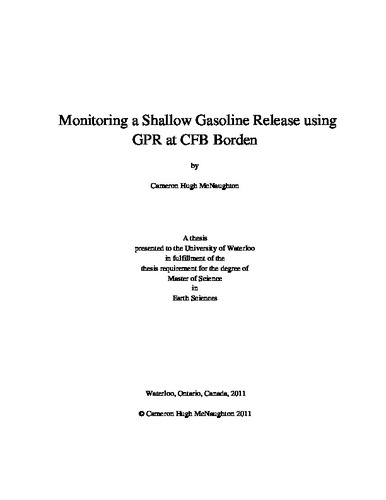 This hydrogeophysical field experiment evaluated the ability of high frequency (450 & 900 MHz) ground penetrating radar (GPR) to characterize the release of gasoline over an annual cycle of in situ conditions. In August 2008, 200 liters of E10 gasoline were released into the unconfined sand aquifer at CFB Borden. The 900 MHz profiling clearly shows the development of shallow (i.e., above 10 ns) high reflectivity in the vicinity of the trench immediately after the release. Additional lateral extension of high reflectivity zone was observed over the following 20 days until the seasonal water table low stand occurred, after which no further lateral movement was observed. Throughout the remainder of the monitoring, the 900 MHz profiling observed a long-term dimming of reflectivity at the periphery of the impacted zone. While direct imaging of the shallow impacted zone by the 450 MHz antennas was significantly obscured by the superposition with the direct air-ground wave arrival; its improved depth of penetration allowed the measurement of a velocity “pull-up” of an underlying stratigraphic interface resulting from the displacement of low velocity water by high velocity gasoline. The maximum pull-up was observed during the water table low stand. The ongoing changes in the pull-up magnitude during the remainder of the observation period suggest the continued redistribution of fluids in the impacted zone. Because of the shallow depth of the gasoline impacted zone, the effects of freezing during the winter period were observed in the GPR imaging. The presence of the gasoline impacted zone appears to have affected the depth of freezing, causing a depression of the frozen soil base. The dimming of the direct air-ground wave complex indicates that the contaminant phase brought to the surface by the water table fluctuations have impacted the nature of the near-surface freezing.