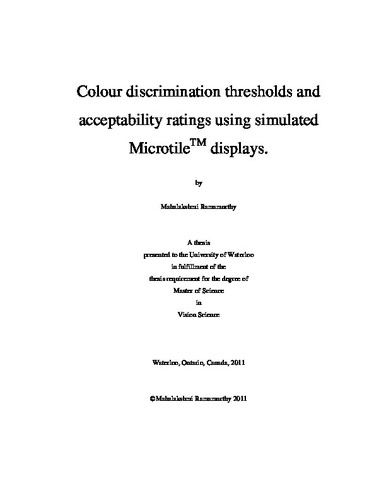 Introduction Nearly all flat panel video display monitors have luminance and colour variations as the angle of view varies from the monitor’s perpendicular. The new MicrotileTM displays developed by Christie Digital are no exception to this general finding. A review of any book on colour science will show that there is substantial amount of literature on just noticeable colour differences within various colour spaces. Despite the wealth of data on the topic, there is no general consensus across different industries as to which colour space and colour difference equations are appropriate. Several factors like the background colour, object size, texture of the stimulus are different for different studies; these factors make it very difficult to determine precisely the effect of viewing angle on the perception of coloured images on the Microtiles display based on previous research. Hence, the objective of this thesis was to quantify the measured colour shifts of a Microtile display at different viewing angles, in steps of perceptible thresholds and to evaluate the acceptability of distortions at different viewing angles for complex scenes. Methods A preliminary experiment was setup to study the behaviour of Microtile display primaries as a function of viewing angle. The aim was to measure the shift in hue and luminance of the three primaries at different eccentricities (from 0o to 40o). The measured trend was used to simulate Microtile shifts on complex images for the rating task. In the first part of the perceptibility experiment, three reference colours were picked and 12 vectors heading towards the blue-yellow region of the L*a*b* colour space (pertaining to the colour shifts noticed with the Microtile displays). A uniform reference colour was presented in three of the four quadrants on the CRT monitor and one quadrant changed colour in the direction of the sampled vector. An adaptive, four alternate forced choice procedure was employed to determine thresholds for each of the 3 reference colours. The adaptive technique used was a ZEST paradigm. In the second part of the perceptibility experiment, eighteen directions were sampled around each reference colour. The rating task was based on simulating the measured attenuations of the Microtile primaries on complex scenes. Subjects rated the images both in terms of acceptability/unacceptability and as percentage image degradation. The simulation was presented on three static complex images, car, landscape and portrait. A total of 60 subjects participated in the study, 20 subjects for each experiment. All subjects were between the age group of 15 to 35 years of age and underwent battery of colour vision tests before being included in the study. All subjects included had average to superior colour discrimination as categorized using the FM-100 Hue discrimination test. Results Study1: The preliminary study on Microtile display characteristics as a function of viewing angle showed that all the three primaries decreased in luminance with change in viewing angle. The red primary decreased at a faster rate compared to the other two primaries. The trend presents as a decrease in luminance with the hue shifting towards the blue-green region of the CIE1974 L*a*b* space. Study 2: Results from both the first and second parts of the perceptibility experiment showed that the vectors sampled in different directions approximated to ellipsoids in the L*a*b* colour space. This finding was consistent with the colour discrimination literature. Vectors on the equi-luminance plane were significantly longer than the vectors on the non equi-Luminance plane. Results showed that the average perceptibility thresholds in the non equi-luminance direction were lower than 1∆ELab¬¬¬¬. Study 3: Results from the rating experiments showed that irrespective of the complexities in the images, distortions greater than five times thresholds were less than 50% acceptable and were rated to be at least 30% degraded. This corresponds to a viewing angle greater than 10o for a Microtile display. The relationship between the stimulus (ΔE) and subjective Image degradation judgements followed a linear relationship, with the portrait and landscape having similar functions, whereas the car was rated more degraded at lower ΔEs and less degraded at higher ΔEs compared with the other two scenes. Conclusion Perceptibility thresholds for different reference colours showed that the conventionally used calibration precision of 1 ΔELab is a lenient criterion. Perceptibility thresholds are at least 25% less for the Microtile display reference condition. From the results of the rating data a distortion greater than five times thresholds is less than 50% acceptable and appears to be at least 30% degraded for static complex images. However, the image quality judgments appear to be related to scene context, which requires further study.