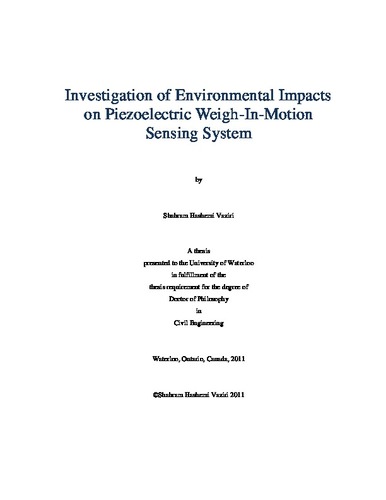 Transportation by trucks plays a major role in North America’s economy. The growth of this industry will increase the loads on existing roads and highways and raises the possibility of overloaded vehicles, which causes significant damage to the pavement and consequently will reduce the lifespan of the roads. Weigh-in-motion (WIM) systems technology helps to address the challenge of overloaded vehicles. This technology provides traffic monitoring, collects data for pavement research and design, and improves the capacity of static weigh station operations. However, there is still a lack of knowledge about the behaviour of WIM sensors installed in different environments, which affects reliable and precise data gathering. More knowledge is required on proper installation procedures, pavement design for WIM systems, choice of sensor type for location, and calibration processes. This research is intended to explore the behaviour of WIM piezoelectric sensors under different loads and environmental conditions. Specifically, the effects of air and pavement temperature, and weight and speed of trucks are examined with respect to the estimation accuracy of WIM sensors. To accomplish this, three WIM systems composed of different piezoelectric transducers were installed at the CPATT test site at the Waste Management facility of the Region of Waterloo in 2007, and two WIM systems were installed between exits 238 and 250 on Highway 401 eastbound near Woodstock, Ontario. It was concluded that the output of the polymer piezoelectric sensor is influenced by temperature and weight factors but not by normally observed vehicle speed differences. While temperature can be compensated for, not enough information has been gathered yet does the same for weight factor. It should be noted that very low speeds (e.g. < 50 km/hr) result in significant errors for all the sensors, so that in congested sections WIM results should be interpreted accordingly. These results will be useful for investigating the effects of environmental conditions on other WIM systems and for predicting the responses of sensors in actual installation environments. This will assist in the recommendation of: (1) alternative and transparent calibration procedures for the WIM sensor systems, (2) and improved benefits of least expensive technology.