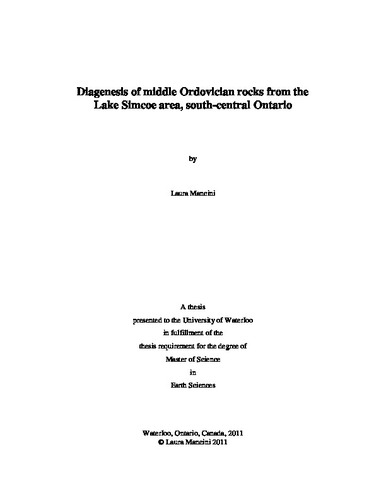 Middle Ordovician carbonates in the Lake Simcoe area, south-central Ontario were examined to determine if: (1) The δ18O values of early-stage calcite cement in hardgrounds are useful proxies for Ordovician seawater δ18O values; (2) a regional hydrothermal event affected middle Ordovician strata in the Lake Simcoe area. Whole rock samples of middle Ordovician hardgrounds and immediately overlying limestones containing early calcite cement have δ13C values ranging from -1.7 to +2.9‰ (PDB) and δ18O values ranging from -6.9 to -2.9‰ (PDB). Hardground δ18O values and the similarity of the isotopic composition between the hardgrounds and overlying limestones are consistent with diagenetic alteration during shallow burial, which indicates the hardgrounds are not useful proxies. Late-stage calcite cements have δ13C values from -8.4 to +2.9‰ (PDB) and δ18O values from -11.4 to -6.0‰ (PDB). Late-stage microcrystalline dolomites have δ13C values from -3.9 to +0.4‰ and δ18O values from -10.7 to -7.6‰. Late-stage saddle dolomites have δ13C values from -1.7 to 1.9‰ and δ18O values from -13.8 to -8.5‰. The late-stage carbonate δ18O values are more negative than the early-stage carbonate δ18O values and are interpreted to reflect progressively deeper burial diagenesis. Four types of fluid inclusions were identified in late-stage calcite, saddle dolomite, barite, and quartz. Type 1 inclusions are aqueous liquid-rich with very consistent low to very low vapour-liquid ratios and are of primary, secondary pseudosecondary and indeterminate origins. Type 2 inclusions are aqueous liquid-only and are of primary and secondary origins. Type 3 inclusions are oil-bearing, liquid-rich with low to medium vapor-liquid ratios and are of secondary origin. Type 4 inclusions are vapour-only and are of indeterminate origin. The type 4 inclusions analyzed did not yield any microthermometric data suggesting they are empty cavities that have lost all their fluid. Fluid inclusions of primary, secondary and pseudosecondary origins in calcite, dolomite and quartz have overlapping homogenization temperatures ranging from 43 to 188°C. Fluid inclusions of indeterminate origin in calcite and barite have homogenization temperatures from 80 to greater than 200°C. Petrographic and microthermometric evidence indicates that fluid inclusion homogenization temperatures greater than 150°C most likely are caused by stretching or leaking; therefore, are discounted. Fluid inclusion types 1 and 2 represent two fluid inclusion assemblages (FIA) based on final ice melting temperatures. The high salinity (10 to 30 wt%CaCl2) inclusions in FIA 1 are of primary, secondary, pseudosecondary and indeterminate origin in calcite, dolomite, barite and quartz. Fluid inclusions in FIA 1 are interpreted as reflecting saline basin brines from which the host minerals precipitated during burial diagenesis. The low salinity (0 to 2.7 wt%CaCl2) inclusions in FIA 2 are of secondary and indeterminate origin in calcite. Fluid inclusions in FIA 2 may reflect a meteoric origin such as in a vadose or phreatic environment based on inclusions containing different phases and variable vapor-liquid ratios. Alternatively the low salinity inclusions may reflect alteration from an influx of meteoric fluids that migrated through basement faults and fractures during periods of uplift and erosion. Early and late-stage carbonates from this study precipitated from 18O-depleted pore fluids and/or at progressively higher temperatures accompanying deeper burial. The FIA 1 homogenization temperatures support burial diagenesis at 66 to 80°C if it is assumed the rocks were buried 2 km, the surface temperature was 20°C and the geothermal gradient was between 23 to 30°C/km. An alternative interpretation is mineral precipitation during a regional hydrothermal event. Burial diagenesis does not explain the fluid inclusion homogenization temperatures of 90°C and greater unless geothermal gradients are higher than 35°C/km or burial depth is increased to 3 km or more. However, thermal maturity of organic matter in the Michigan Basin suggests Ordovician strata were never buried more than 2 km. Four models for regional hydrothermal fluid migration are: (1) gravity-driven flow; (2) ‘squeegee-type’ fluid flow; (3) convection cell fluid flow; and (4) structurally-controlled fluid flow. The gravity-driven model relies on continental heat flow and an influx of meteoric water from basin catchment areas. For the ‘squeegee, convection cell and structurally controlled models, hot fluids could have entered the region from several conduits concurrently during episodic reactivation of basement faults and fracture systems in response to intracratonic stresses created by the continuous interaction of tectonic plates. Determining which of the models best explains regional hydrothermal fluid flow in the Michigan Basin is difficult for several reasons; (1) surface temperatures and maximum burial temperatures at the time of mineral precipitation in the Michigan Basin during the Ordovician are unknown; (2) the timing of mineral precipitation in relation to tectonic pulses is undetermined; (3) there is as yet no known deep-seated heat sources in the Michigan Basin for convection to occur; and (4) it is unknown whether advection is a major process in the Michigan Basin. A collaborative multi-disciplinary research project covering geology, geophysics and hydrogeology would provide much more integrated data than is currently available from stable isotopes, fluid inclusions and organic matter.