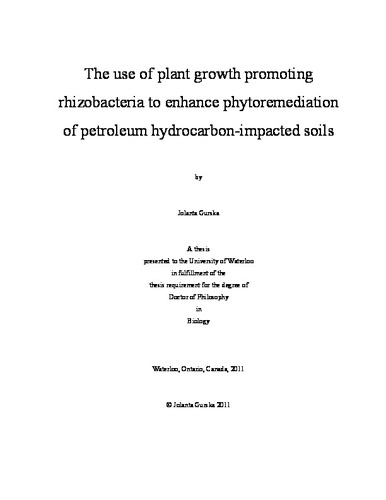 Phytoremediation is a cost-effective and environmentally conscious technology that utilizes plants to remediate a variety of contaminants from the soil. Petroleum hydrocarbons (PHC), as a result of their widespread use are a common environmental problem in soils, and one where phytoremediation would be well suited as a solution. Phytoremediation of PHC proceeds mainly through microbial degradation in plant root zone (rhizosphere) and plant degradation of PHC. The high concentrations of PHC at many sites are an impediment to phytoremediation. The toxicity of PHC hinders plant growth and prohibits remediation. One way to overcome this decrease in plant growth is by employing plant growth promoting rhizobacteria (PGPR). PGPR are naturally present soil bacteria that influence plant growth through direct and indirect methods, and can ultimately act to reduce plant stress. If PHC toxicity could be overcome with the use of PGPR, phytoremediation may become a viable option for remediation of PHC contaminated sites. This study was divided into a field component and a laboratory component, both of which focused on different aspects of phytoremediation of PHC enhanced with PGPR. Previous studies have shown that PGPR-enhanced phytoremediation was successful in the greenhouse. As a result of this, long-term field studies of this system were initiated. Effectiveness was evaluated by assessing plant performance and remediation of PHC in the field. The long-term impact of PGPR on the resident microbial community was evaluated, to ensure there was no detriment to microbial diversity. Following success in the field, lab studies were performed to evaluate the effect of PGPR and PHC by examining both physiological and molecular changes in plants exposed to PHC where PGPR effects were demonstrated. When PGPR were used in field experiments to facilitate phytoremediation, PHC toxicity was alleviated, and this was evident through improved germination, increased plant growth, and improved photosynthetic performance of selected grass plant species. These findings were corroborated at two field sites, one with high and one with low levels of weathered PHC. Addition of PGPR consistently improved remediation at each site. When remediation of PHC was followed over a period of three years, it was found that despite increased plant growth and increased remediation with addition of PGPR, remediation slowed in the second and third year of growth; this was particularly evident at the site with low levels of PHC. Further investigation revealed that the decrease in remediation may be attributed to increases in biogenic material over the growing season that may not be adequately removed when standard regulatory protocols are followed during PHC analysis in soil. The possibility of degradation being masked by biogenic material was supported by the fact that specific, recalcitrant components of the PHC, such as polycyclic aromatic hydrocarbons (PAHs), continue to degrade over time. Microbial community changes during phytoremediation of PHC soils with PGPR were investigated. It was found that addition of PGPR resulted in higher microbial numbers in the soil but did not produce significant changes in the indigenous microbial populations. Following field study, phytoremediation of PHC contaminated soil was further studied in the laboratory. The effects of PHC on gene expression of Secale cereale were evaluated using differential display PCR. Six differentially expressed genes were found: poly(A)-binding protein, phytoene desaturase, cytochrome P450, plasma membrane H+ATPase, and knotted-like homeobox transcriptional activator. Their expression was confirmed using quantitative PCR (qPCR). In addition, the expression of four reference genes was evaluated and most stable reference genes in Secale cereale were recommended. Phenolic and flavonoid content in Secale cereale and Festuca arundinacea was evaluated and it was found that PGPR and PHC affected phenolic production in shoots of these plants, albeit differently in the two plant species.