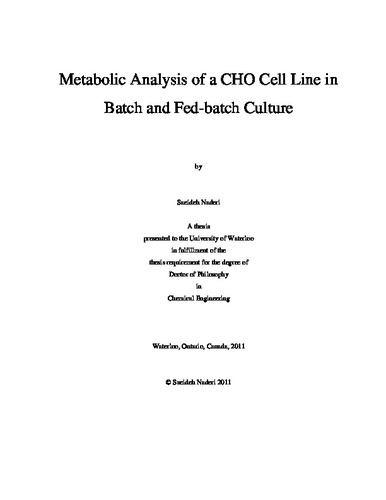 Animal cell culture is widely used as a platform for the production of a variety of biopharmaceuticals. The development of an efficient and productive cell culture requires a deep understanding of intra-cellular mechanisms as well as extra-cellular conditions for optimal synthesis. Mathematical modeling can be an effective strategy to predict, control, and optimize cell performance under different culture conditions. This research presents the evaluation of Chinese hamster ovary (CHO) cell culture secreting recombinant anti-RhD monoclonal antibody (MAb) through different processing modes, namely batch, fed-batch and perfusion operations. The ultimate objective of this study was to establish a comprehensive dynamic model which may be used for model-based optimization of the cell culture for MAb production in both batch, fed-batch or perfusion systems. In analyzing process performance, the key potential cause of cell growth inhibition was attributed to lowering of pH in the culture possibly due to the accumulation of dissolved carbon dioxide. The most important finding in this regard was the significantly different observed maximum total viable cell density in two identical cultures differing in culture volume only (250mL and 500mL). However, the other byproduct metabolites such as lactate and ammonia and glucose depletion were also capable affecting growth adversely causing growth arrest, viability reduction, apoptosis initiation and progress. Employing the experimental results of nutrient consumption, metabolite and biomass production, a metabolic flux based methodology was developed for modeling the metabolism of a CHO cell line. The elimination of insignificant fluxes resulted in a simplified metabolic network which was the basis for modeling the significant extracellular metabolites. Using kinetic rate expressions for growing and non-growing subpopulations, a logistic model was first developed for cell growth and dynamic models were formulated to describe culture composition and monoclonal antibody (MAb) secretion. The viable cell population was assumed to consist of normal growing, normal non-growing and apoptotic cell subpopulations. The rate of apoptotic cell formation was assumed to have a second order dependence on the normal cell concentration. The proposed mathematical model for metabolites included distinct terms that reflected the metabolic rates of growing and non-growing cell populations. The model was validated for a range of glutamine and glucose concentrations. Good agreement was obtained between model predictions and experimental data. In subsequent steps the attempt was to correlate the growth kinetics to significant variables of the culture. The regulatory effects identified through each culture condition were combined for a rational design of a dynamic model constructed for the viable cell subpopulation. A Tessier-based model was applied for defining the fraction of growing cells as a function of a growth inhibitor, presumably dissolved carbon dioxide. Although only few variables appeared in the biomass model, all equations were solved simultaneously. The parameters were estimated using the Metropolis-Hastings algorithm and the fmincon function in MATLAB. The final model adequately predicted the effect of significant variables on the metabolic behavior of CHO cells in batch, fed-batch and perfusion systems.