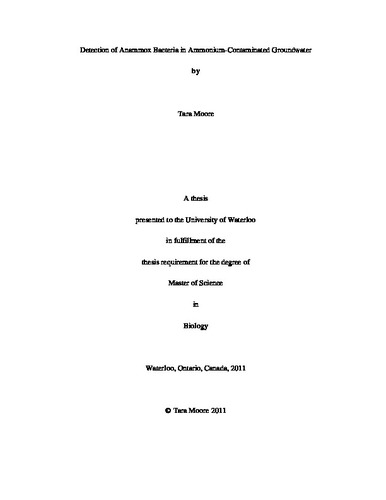 Anaerobic ammonium-oxidizing (anammox) bacteria perform an important step in the global nitrogen cycle: oxidizing ammonium and reducing nitrite to form dinitrogen gas in the absence of oxygen. Anammox bacteria from the Planctomycetes phylum have been identified in a variety of natural environments but their role in groundwater ammonium oxidation has been unclear. Recent isotope studies have suggested that anammox bacteria are likely active in ammonium attenuation at contaminated groundwater sites; however, only limited biomarker-based data confirmed their presence prior to this study. I used complimentary molecular and isotope-based methods to assess the communities of anammox performing organisms at three ammonium contaminated groundwater sites in Canada: quantitative real-time PCR (qPCR), denaturing gradient gel electrophoresis (DGGE), DNA sequencing of 16S rRNA genes (with both Sanger and Illumina technologies), and ¹⁵N-tracer incubations. DNA sequencing and qPCR results demonstrated that anammox performing organisms were present at all three contaminated sites, and that they were among the dominant bacterial community members for at least one particular site (Zorra, Ontario). In addition, anammox bacterial diversity was variable. One site possessed four of five known genera of anammox performing organisms although the dominant anammox bacteria at all sites belonged to the Candidatus Brocadia genus. Isotope data from two groundwater sites showed that denitrification and anammox occurred jointly and although denitrification was the dominant process, anammox was responsible for maxima of 18 and 36% of N₂ production at these sites. By combining molecular and isotopic results I have demonstrated the diversity, abundance and activity of these anaerobic chemolithoautotrophic bacteria; these results provide strong evidence for their important biogeochemical role in attenuating groundwater ammonium contamination.