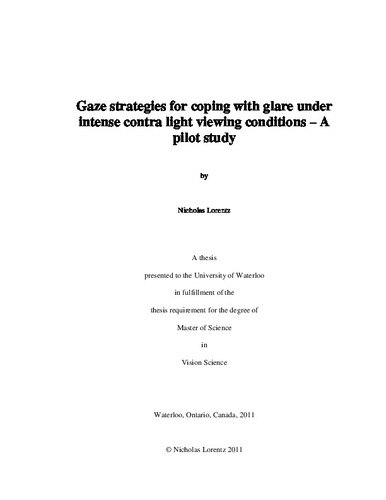 Purpose: This is a pilot study to investigate gaze strategies for coping with glare when performing a simple visual task under intense contra light viewing conditions. Method: Twenty-four normally sighted participants were recruited for this study. They consisted of a young subgroup (n=12), aged 21-29 (mean = 25.3 ± 2.5), and an older subgroup (n=12), aged 51-71 (mean = 57.3 ± 6.1). Visual acuity (VA) and Brightness Acuity testing (BAT) were used to assess central vision. Participants were required to locate and approach (from 15m) a small platform that was contra lit by a powerful light source. Upon arrival at the platform, participants were required to insert a small ball into a similarly sized receptacle. An ASL Mobile Eye (Bedford, MA) eye tracker was used to monitor gaze position throughout until the task was completed. Scene and pupil videos were recorded for each participant and analyzed frame by frame to locate the participant’s eye movements. Results: Two participants (one from each subgroup) adopted aversion gaze strategies wherein they avoided looking at the contra lit task for more than 50% of the task completion time. For the remainder of the experimental trial, these two participants were either looking toward the glare source or blinking. The other twenty-two participants opted to endure the contra light condition by gazing directly into the glare for the majority of the task completion time. An individual t-test between the younger iv subgroup’s BA scores vs. the older subgroup’s BA scores was statistically significant (p<0.05). Significantly poorer BAT scores were found in the older subgroup, however, individual participant’s BAT scores did not necessarily predict the ability to cope with a contra lit glare source. Although, statistically significant differences were not found between the two subgroups when examining their VA and length of time to complete the course, a trend was found, as the older subgroup consistently had poorer VA scores and took longer to complete the course. Further research must be completed with a larger sample size to fully understand the glare aversion strategies one must elicit when dealing with a contra lit glare source within the built environment, and to confirm the three glare strategies proposed by this pilot study.