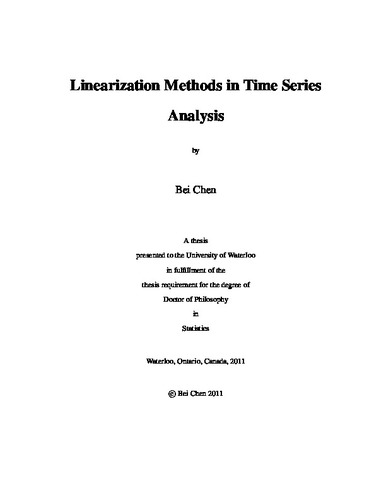 In this dissertation, we propose a set of computationally efficient methods based on approximating/representing nonlinear processes by linear ones, so-called linearization. Firstly, a linearization method is introduced for estimating the multiple frequencies in sinusoidal processes. It utilizes a regularized autoregressive (AR) approximation, which can be regarded as a "large p - small n" approach in a time series context. An appealing property of regularized AR is that it avoids a model selection step and allows for an efficient updating of the frequency estimates whenever new observations are obtained. The theoretical analysis shows that the regularized AR frequency estimates are consistent and asymptotically normally distributed. Secondly, a sieve bootstrap scheme is proposed using the linear representation of generalized autoregressive conditional heteroscedastic (GARCH) models to construct prediction intervals (PIs) for the returns and volatilities. Our method is simple, fast and distribution-free, while providing sharp and well-calibrated PIs. A similar linear bootstrap scheme can also be used for diagnostic testing. Thirdly, we introduce a robust lagrange multiplier (LM) test, which utilizes either the bootstrap or permutation procedure to obtain critical values, for detecting GARCH effects. We justify that both bootstrap and permutation LM tests are consistent. Intensive numerical studies indicate that the proposed resampling algorithms significantly improve the size and power of the LM test in both skewed and heavy-tailed processes. Moreover, fourthly, we introduce a nonparametric trend test in the presence of GARCH effects (NT-GARCH) based on heteroscedastic ANOVA. Our empirical evidence show that NT-GARCH can effectively detect non-monotonic trends under GARCH, especially in the presence of irregular seasonal components. We suggest to apply the bootstrap procedure for both selecting the window length and finding critical values. The newly proposed methods are illustrated by applications to astronomical data, to foreign currency exchange rates as well as to water and air pollution data. Finally, the dissertation is concluded by an outlook on further extensions of linearization methods, e.g., in model order selection and change point detection.