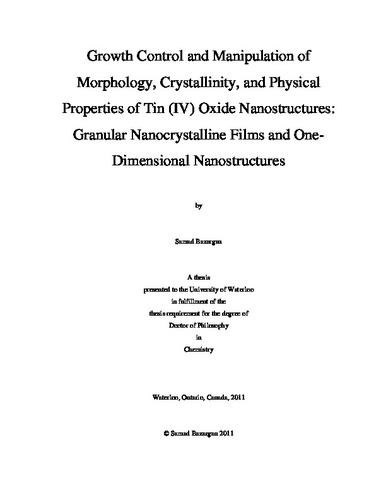 A variety of nanostructures of tin (IV) oxide (TO) are synthesized using two fabrication methods: a solution spin-coating method followed by post-annealing in an oxygen flow and a newly developed catalyst-assisted pulsed laser deposition (PLD) technique. The spin-coating method is used to fabricate granular TO films with monodisperse, stable, ultra-small nanocrystallites (4-5 nm in size), the size of which is found to increase exponentially with post-anneal above 500°C. These nanocrystalline films are conductive and highly transparent, and their bandgap shows broadening due to a high carrier concentration. Their resistivity behavior as a function of temperature in the 50-280 K range can be explained by a two-medium transport model, i.e. transport through the crystalline grains and across the grain boundaries, and through the charge-depletion layer, where a potential barrier is found for transport across the grain boundaries. Electronic transport in these films follows a 3D-variable range hopping model, which reveals an increase in the localization length of carriers with increasing the TAnneal above the onset of exponential growth at TAnneal= 500°C. By homogenously doping Eu3+ in these nanocrystalline films up to a high doping level of ~ 8%, optical luminescence and magnetic orderings can be introduced into these nanocrystalline TO films. Both characteristic Eu3+ emission and defect-related TO emissions are observed in the otherwise transparent TO films upon UV-excitation. In spite of the non-magnetic nature of Eu3+ ions, magnetic orderings appear in the highly doped TO films below 50 K upon the emergence of Eu2Sn2O7 phase. In the second part of this work, we employ a layer of gold nanoislands with controlled sizes (10-50 nm) as catalysts for pulsed laser deposition of TO nanostructures. Highly crystalline TO nanobricks, cuboid nanoparticles, nanowires and nanobelts are obtained for the first time through vapour-solid or vapour-liquid-solid (VLS) mechanisms. Of particular interest are the micron long one-dimensional (1D) nanowires and nanobelts, with the smallest square and rectangular cross-sections, respectively, ever reported. These single-crystalline nanostructures are obtained at relatively low temperatures of 600°C, for nanowires, and 500°C, for nanobelts, and their cross-sectional sizes can be easily controlled by the size of the gold nanoislands. The nanobelts are found to grow along the [100] and [101] axes, while the nanowires appear to grow along the [100] axis. The growth evolution of the nanobelts are also investigated in detail revealing their VLS growth mode and their single-crystalline structure throughout the growth, which opens the prospect of controlling their growth axis and consequently their side-surface planes by pinning the base to the substrate at the desired crystalline orientation. Together, the two fabrication methods developed in the present work offer facile approaches to growing two scientifically and technologically important classes of TO nanostructures, i.e., nanocrystalline film and 1D nanostructures. Thorough characterization of the resulted nanostructured materials using advanced microscopic, spectroscopic and other techniques, including Helium Ion Microscopy, has been provided. Modification of structure, morphology and physical properties of these functional nanostructured materials are also illustrated by controlling the growth parameters and by (Eu-)doping, which pave the way for introducing new properties for applications in chemical sensing, (opto)electronics and displays.