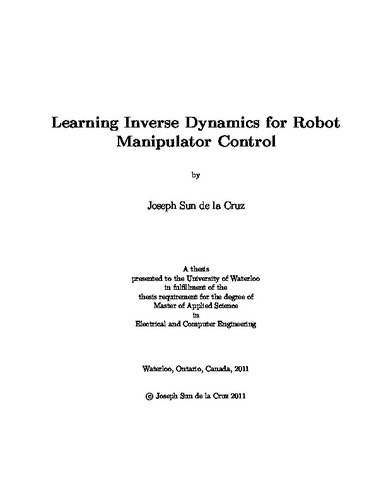 Model-based control strategies for robot manipulators can present numerous performance advantages when an accurate model of the system dynamics is available. In practice, obtaining such a model is a challenging task which involves modeling such physical processes as friction, which may not be well understood and difficult to model. Furthermore, uncertainties in the physical parameters of a system may be introduced from significant discrepancies between the manufacturer data and the actual system. Traditionally, adaptive and robust control strategies have been developed to deal with parametric uncertainty in the dynamic model, but often require knowledge of the structure of the dynamics. Recent approaches to model-based manipulator control involve data-driven learning of the inverse dynamics relationship, eliminating the need for any a-priori knowledge of the system model. Locally Weighted Projection Regression (LWPR) has been proposed for learning the inverse dynamics function of a manipulator. Due to its use of simple local, linear models, LWPR is suitable for online and incremental learning. Although global regression techniques such as Gaussian Process Regression (GPR) have been shown to outperform LWPR in terms of accuracy, due to its heavy computational requirements, GPR has been applied mainly to offline learning of inverse dynamics. More recent efforts in making GPR computationally tractable for real-time control have resulted in several approximations which operate on a select subset, or sparse representation of the entire training data set. Despite the significant advancements that have been made in the area of learning control, there has not been much work in recent years to evaluate these newer regression techniques against traditional model-based control strategies such as adaptive control. Hence, the first portion of this thesis provides a comparison between a fixed model-based control strategy, an adaptive controller and the LWPR-based learning controller. Simulations are carried out in order to evaluate the position and orientation tracking performance of each controller under varied end effector loading, velocities and inaccuracies in the known dynamic parameters. Both the adaptive controller and LWPR controller are shown to have comparable performance in the presence of parametric uncertainty. However, it is shown that the learning controller is unable to generalize well outside of the regions in which it has been trained. Hence, achieving good performance requires significant amounts of training in the anticipated region of operation. In addition to poor generalization performance, most learning controllers commence learning entirely from `scratch,' making no use of any a-priori knowledge which may be available from the well-known rigid body dynamics (RBD) formulation. The second portion of this thesis develops two techniques for online, incremental learning algorithms which incorporate prior knowledge to improve generalization performance. First, prior knowledge is incorporated into the LWPR framework by initializing the local linear models with a first order approximation of the prior information. Second, prior knowledge is incorporated into the mean function of Sparse Online Gaussian Processes (SOGP) and Sparse Pseudo-input Gaussian Processes (SPGP), and a modified version of the algorithm is proposed to allow for online, incremental updates. It is shown that the proposed approaches allow the system to operate well even without any initial training data, and further performance improvement can be achieved with additional online training. Furthermore, it is also shown that even partial knowledge of the system dynamics, for example, only the gravity loading vector, can be used effectively to initialize the learning.