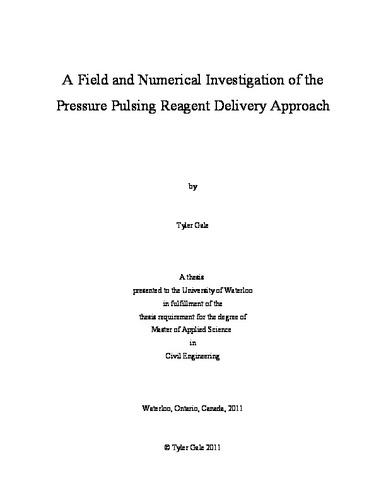 The efficacy of injection-driven remediation techniques for non-aqueous phase liquid (NAPL) source zones is limited by the principle that fluid flow is focused along paths of least hydraulic resistance. The pressure pulse technology stands among a number of innovative methods that have been developed with the aim of overcoming or mitigating this limitation. The objective of this research was to observe and document differences in saturated groundwater flow and solute transport between an injection using a conventional or continuous pressure delivery approach and an injection using a pressure pulsing instrument. The underlying motivation was to identify engineering opportunities presented by pressure pulsing with the potential to improve remediation efficiency at contaminated sites. A series of tracer injections were conducted in the unconfined aquifer at the University of Waterloo Groundwater Research Facility at Canadian Forces Base (CFB) Borden near Alliston, ON (homogeneous fine sand), and in the shallow aquifer at a groundwater research site located on the North Campus at the University of Waterloo (moderately heterogeneous with discrete layers varying from fine sand to silt). A single injection well was used at each site for both the conventional and pressure pulsing injections. Different tracers were used for consecutive injections. Bromide, Lithium, Chloride, and fluorescent dyes (Rhodamine WT and Sulforhodamine B) were used. Formation pressurization data was captured by pressure transducers. The spatial distribution of the injected tracers was monitored at a series of multilevel wells. A groundwater flow and solute transport modeling exercise (MODFLOW and MT3DMS numerical engines) simulating the rapid boundary pressure modulation that occurs in association with pressure pulsing was conducted to complement the field injections. A two-dimensional domain was used to conduct a parametric investigation of pressure modulation and its effect on flow and transport. A three-dimensional domain served to scale-up the two-dimensional results and for benchmarking against field observations. Pressure pulsing simulation results reveal that repeated sudden onset of injection cessation produces brief periods of gradient reversal near the injection well and the development of a mixing zone around the injection well. The spatial extents of this mixing zone are highly dependent upon the hydraulic diffusivity of the medium. Greater heterogeneity in combination with presence of high hydraulic diffusivity pathways maximized the extent of the mixing zone and the magnitude of transverse and reversal hydraulic gradients. Lower pulsing frequency and higher pulsing amplitude favoured a more significant mixing zone, though these effects were secondary to geologic properties. Use of the pressure pulsing tool did not manifest into distinct changes in tracer breakthrough at either field research site. Comparison between tracer tests was complicated by sorption of fluorescent dyes and ongoing well development. Solute transport simulation results demonstrated augmentation of dispersion arising from the mixing zone phenomenon, but no distinct changes in advection.