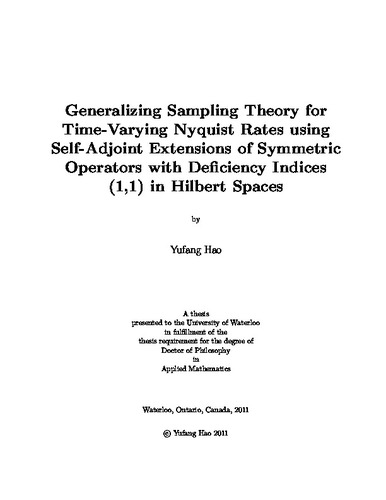 Sampling theory studies the equivalence between continuous and discrete representations of information. This equivalence is ubiquitously used in communication engineering and signal processing. For example, it allows engineers to store continuous signals as discrete data on digital media. The classical sampling theorem, also known as the theorem of Whittaker-Shannon-Kotel'nikov, enables one to perfectly and stably reconstruct continuous signals with a constant bandwidth from their discrete samples at a constant Nyquist rate. The Nyquist rate depends on the bandwidth of the signals, namely, the frequency upper bound. Intuitively, a signal's `information density' and `effective bandwidth' should vary in time. Adjusting the sampling rate accordingly should improve the sampling efficiency and information storage. While this old idea has been pursued in numerous publications, fundamental problems have remained: How can a reliable concept of time-varying bandwidth been defined? How can samples taken at a time-varying Nyquist rate lead to perfect and stable reconstruction of the continuous signals? This thesis develops a new non-Fourier generalized sampling theory which takes samples only as often as necessary at a time-varying Nyquist rate and maintains the ability to perfectly reconstruct the signals. The resulting Nyquist rate is the critical sampling rate below which there is insufficient information to reconstruct the signal and above which there is redundancy in the stored samples. It is also optimal for the stability of reconstruction. To this end, following work by A. Kempf, the sampling points at a Nyquist rate are identified as the eigenvalues of self-adjoint extensions of a simple symmetric operator with deficiency indices (1,1). The thesis then develops and in a sense completes this theory. In particular, the thesis introduces and studies filtering, and yields key results on the stability and optimality of this new method. While these new results should greatly help in making time-variable sampling methods applicable in practice, the thesis also presents a range of new purely mathematical results. For example, the thesis presents new results that show how to explicitly calculate the eigenvalues of the complete set of self-adjoint extensions of such a symmetric operator in the Hilbert space. This result is of interest in the field of functional analysis where it advances von Neumann's theory of self-adjoint extensions.