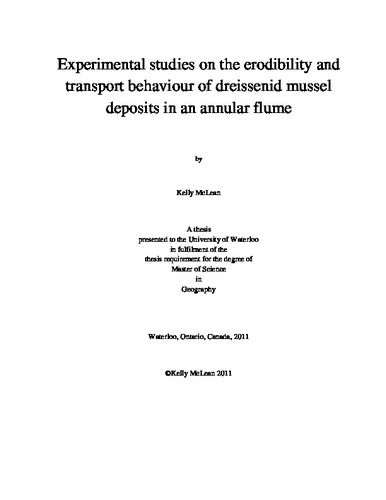 Dreissenid mussels alter particle transport dynamics in the near shore environment of the Great Lakes by intercepting, retaining and recycling suspended solids that might otherwise be exported to the offshore environment (Hecky et al., 2004). Particulate materials filtered from the water column by dreissenids are subsequently released as either feces or pseudofeces (Walz, 1978). This bio-transformation process alters the nature (grain size distribution, settling velocity and density) and transport properties (critical shear stress for erosion, erosion rates and bed stability) of particulate matter in surficial sediments. While knowledge of the transport characteristics of this material is required to refine particle transport dynamics and energy flow models in the Great Lakes, few studies have been specifically conducted to directly quantify these processes. An annular flume was used to determine the bed stability, rate of erosion and critical shear stress for erosion of dreissenid biodeposits. Materials studied in the flume consisted of 1) a combination of biodeposits and surface sediments collected from dreissenid beds and 2) biodeposits harvested in a weir box with dreissenids. The results show that erosion characteristics and sediment transport properties were strongly influenced by bed age; however particle sizes did not increase in the presence of mussels as originally speculated. Bed stability increased after 7 days, with a τcrit of 0.26 Pa compared to the 2 and 14 day consolidation periods (τcrit= 0.13 and 0.15 Pa respectively). In 2010, following a 2 day consolidation period, pure biodeposits harvested in the weir box had a critical shear stress for erosion of 0.052 Pa. The decrease in bed stability found in biodeposits from 2010 compared to the 2008 biodeposit mixture, may be a result of a more diffuse biofilm developing on the highly organic substrate. The mixture of biodeposits collected in 2008 were a combination organic and inorganic materials which may be creating a nutrient limited environment, where biofilm structure consists of more tightly organized biofilm cells and as a result enhance stability in the bed sediments. The decrease observed after 14 days is likely a result of the microbes depleting their resources and dying off. Due to the added roughness the mussels created in the flume, τcrit could not be measured and critical revolutions per minute (RPM) for erosion are reported for flume runs with mussels. During experiments conducted in 2009 with pure biodeposits and mussels the critical RPM was 5.83 while in 2010 in the presence of mussels a critical RPM was not observed. Settling experiments found biodeposits from both years (2008 and 2010) had decreased settling velocities when compared to different sediment types from lacustrine environments. I speculate that the added enrichment of the surficial sediments by mussel biodeposits is enhancing the process of biostabilization and increasing the bed stability and that the presence mussels themselves may additionally be enhancing bed stability by inhibiting flow from reaching the surface sediments/biodeposits.

Kelly McLean (2011). Experimental studies on the erodibility and transport behaviour of dreissenid mussel deposits in an annular flume. UWSpace. http://hdl.handle.net/10012/6310