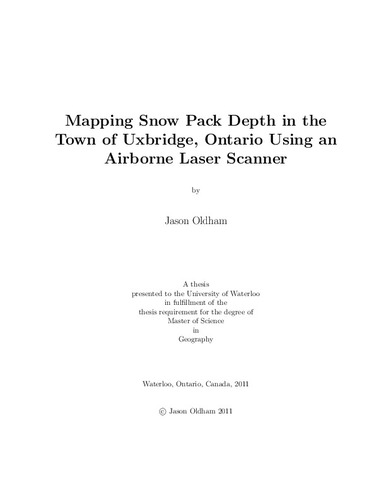 This study aims to present and evaluate a new method for measuring the distribution of snow within built-up environments by differencing elevations collected by an Airborne Laser Scanner (ALS) before, and during peak snow accumulation. Few efforts have been made to study the distribution of snow within built-up environments due to the false assumption that high-intensity rainfall is the main contributor to peak yearly runoff rates. Traditional techniques for measuring snow are often difficult to replicate in built-up environments due to incompatibility of methods and barriers such as buildings, roads and private property. Light Detection and Ranging (LiDAR) technology, specifically ALSs, have previously been used to characterize the distribution of snow under forest canopy, and in remote mountain environments. This study investigates and assesses the utility of high resolution, non-intrusive ALS data for estimating the depth and distribution of snow within the town of Uxbridge, Ontario. ALS flights for this study were completed before the onset of snow accumulation, as well as near peak snow accumulation for the winters of 2010 and 2011. Pre and post snow accumulation ALS measured elevations were differenced to estimate the depth of the snowpack across the entire study area at a resolution of 0.5 m. Ground measurements of snow depth were also completed within 24 hours of each of the winter flights. The LiDAR-estimated and ground-measured snow depths were compared using Spearman's rank correlation coefficient as well as Mean Absolute Error (MAE) and Root Mean Squared Error (RMSE). Results from this thesis show that: 1) Snow depths estimated by differencing elevations from two ALS flights show a MAE of 3 cm and an RMSE of 10 cm when compared to ground-measured snow depths. (2) There is a strong, statistically significant relationship (ρ = 0:82, p < 0:001) between LiDAR-estimated and ground-measured snow depths. (3) An average bias of -3 cm was found for the entire dataset showing an underestimation in the LiDAR-estimated snow depths most likely caused by the effects of low lying vegetation on the fall ALS measurements. The results presented in this study demonstrate that ALSs are capable of providing high spatial resolution snow depth estimates within built-up environments. Furthermore, snow depth measurements made using an ALS can be used to increase the current body of knowledge on the distribution and re-distribution of snow within built-up environments. Snow distributions measured by an ALS could also be used for future development and verification of urban hydrological models.