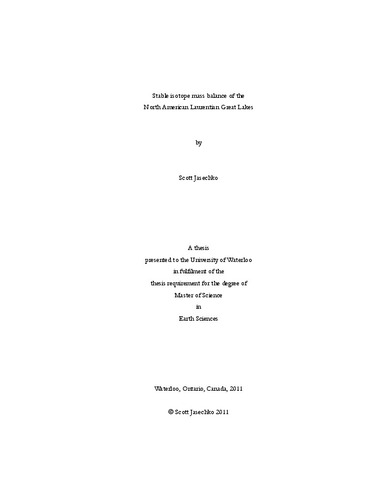 This thesis describes a method for calculating lake evaporation as a proportion of water inputs (E/I) for large surface water bodies, using stable isotope ratios of oxygen (18O/16O) and hydrogen (2H/1H) in water. Evaporation as a proportion of inflow (E/I) is calculated for each Laurentian Great Lake using a new dataset of 516 analyses of δ18O and δ2H in waters sampled from 75 offshore stations during spring and summer of 2007. This work builds on previous approaches by accounting for lake effects on the overlying atmosphere and assuming conservation of both mass and isotopes (18O and 2H) to better constrain evaporation outputs. Results show that E/I ratios are greatest for headwater Lakes Superior and Michigan and lowest for Lakes Erie and Ontario, controlled largely by the magnitude of hydrologic inputs from upstream chain lakes. For Lake Superior, stable isotopes incorporate evaporation over the past century, providing long-term insights to the lake’s hydrology that may be compared to potential changes under a future – expectedly warmer – climate. Uncertainties in isotopically derived E/I are comparable to conventional energy and mass balance uncertainties. Isotope-derived E/I values are lower than conventional energy and mass balance estimates for Lakes Superior and Michigan. The difference between conventional and isotope estimates may be explained by moisture recycling effects. The isotope-based estimates include only evaporated moisture that is also advected from the lake surface, thereby discounting moisture that evaporates and subsequently reprecipitates on the lake surface downwind as recycled precipitation. This shows an advantage of applying an isotope approach in conjunction with conventional evaporation estimates to quantify both moisture recycling and net losses by evaporation. Depth profiles of 18O/16O and 2H/1H in the Great Lakes show a lack of isotopic stratification in summer months despite an established thermocline. These results are indicative of very low over-lake evaporation during warm summer months, with the bulk of evaporation occurring during the fall and winter. This seasonality in evaporation losses is supported by energy balance studies. For Lakes Michigan and Huron, the isotope mass balance approach provides a new perspective into water exchange and evaporation from these lakes. This isotope investigation shows that Lake Michigan and Lake Huron waters are distinct, despite sharing a common lake level. This finding advocates for the separate consideration of Lake Michigan and Lake Huron in future hydrologic studies.