“We are wards of the Crown and cannot be regarded as full citizens of Canada”: Native Peoples, the Indian Act and Canada’s War Effort 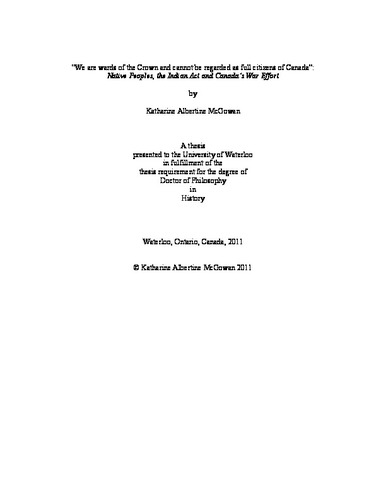 The First World War left few untouched on Canada’s Native reserves: many councils donated money to war funds, thousands of men enlisted and their families sought support from the Military and war-specific charities, and most became involved in the debate over whether Native men could be conscripted and the implications that decision could have for broader Native-government relations. Much of the extant literature on Native participation in the war has paired enthusiastic Native engagement with the Canadian government’s shabby treatment. However, in many different ways and with many different goals, Native peoples achieved significant success in determining the parameters of their participation in the war. Yet, the resolution of these debates between Native peoples and the Canadian government, specifically the Department of Indian Affairs, inadvertently (from the Native perspective) cemented the Indian Act’s key role in Native peoples’ lives, displacing other foundational agreements and traditional organizational principles of reserve life. Native peoples’ varied participation in the First World War paradoxically saw Natives temporarily take control of their relationship with the Canadian government, but in the end brought them more completely under the authority of the Department of Indian Affairs.

Katharine Albertine McGowan (2011). “We are wards of the Crown and cannot be regarded as full citizens of Canada”: Native Peoples, the Indian Act and Canada’s War Effort. UWSpace. http://hdl.handle.net/10012/6301