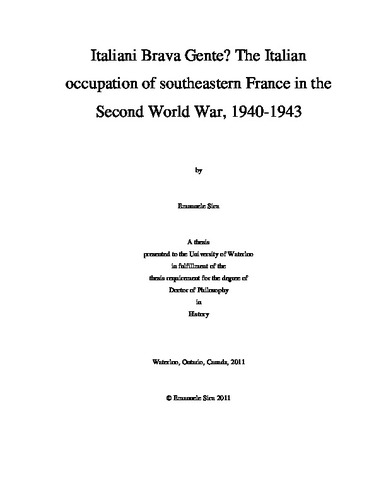 Many academic works have focused on the German occupation of France in the Second World War, both from the perspective of the occupiers and the occupied. Only a few monographs however had dealt so far with the Italian military occupation of southeastern France between 1940 and 1943. My dissertation strives to fill this historiographical gap, by analyzing the Italian occupation policy established by both Italian civilian and military authorities. Compared to the German occupation policy, the Italian occupation was considerably more lenient, as no massacres were perpetrated and wanton violence was rare. In fact, the Italian occupation of France contrasts sharply with the occupation in the Balkans, where Italians resorted to brutal retaliation in response to guerilla activities. Indeed, softer measures in France stemmed from pragmatic reasons, as the Italian army had not the manpower to implement a draconian occupation, but also due to an humanitarian mindset, especially with regards to the Jewish population in southeastern France. This work endeavors to examine the occupation and its impact on southeastern France, especially at a grassroots level, with a particular emphasis on the relations between the Italian soldiers and the Italian immigrants in the area. Furthermore, much light will be shed on the conflict opposing French officials to Italian ones, and on the differences in policy between Italian civilian authorities and Italian military officials.