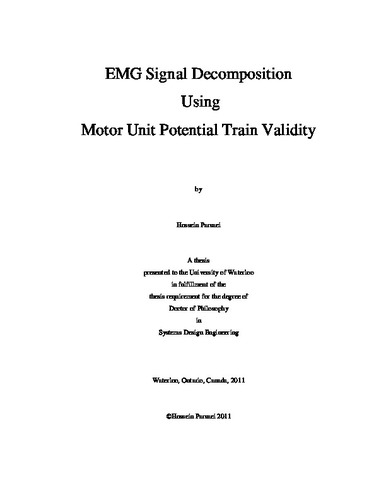 Electromyographic (EMG) signal decomposition is the process of resolving an EMG signal into its component motor unit potential trains (MUPTs). The extracted MUPTs can aid in the diagnosis of neuromuscular disorders and the study of the neural control of movement, but only if they are valid trains. Before using decomposition results and the motor unit potential (MUP) shape and motor unit (MU) firing pattern information related to each active MU for either clinical or research purposes the fact that the extracted MUPTs are valid needs to be confirmed. The existing MUPT validation methods are either time consuming or related to operator experience and skill. More importantly, they cannot be executed during automatic decomposition of EMG signals to assist with improving decomposition results. To overcome these issues, in this thesis the possibility of developing automatic MUPT validation algorithms has been explored. Several methods based on a combination of feature extraction techniques, cluster validation methods, supervised classification algorithms, and multiple classifier fusion techniques were developed. The developed methods, in general, use either the MU firing pattern or MUP-shape consistency of a MUPT, or both, to estimate its overall validity. The performance of the developed systems was evaluated using a variety of MUPTs obtained from the decomposition of several simulated and real intramuscular EMG signals. Based on the results achieved, the methods that use only shape or only firing pattern information had higher generalization error than the systems that use both types of information. For the classifiers that use MU firing pattern information of a MUPT to determine its validity, the accuracy for invalid trains decreases as the number of missed-classification errors in trains increases. Likewise, for the methods that use MUP-shape information of a MUPT to determine its validity, the classification accuracy for invalid trains decreases as the within-train similarity of the invalid trains increase. Of the systems that use both shape and firing pattern information, those that separately estimate MU firing pattern validity and MUP-shape validity and then estimate the overall validity of a train by fusing these two indices using trainable fusion methods performed better than the single classifier scheme that estimates MUPT validity using a single classifier, especially for the real data used. Overall, the multi-classifier constructed using trainable logistic regression to aggregate base classifier outputs had the best performance with overall accuracy of 99.4% and 98.8% for simulated and real data, respectively. The possibility of formulating an algorithm for automated editing MUPTs contaminated with a high number of false-classification errors (FCEs) during decomposition was also investigated. Ultimately, a robust method was developed for this purpose. Using a supervised classifier and MU firing pattern information provided by each MUPT, the developed algorithm first determines whether a given train is contaminated by a high number of FCEs and needs to be edited. For contaminated MUPTs, the method uses both MU firing pattern and MUP shape information to detect MUPs that were erroneously assigned to the train. Evaluation based on simulated and real MU firing patterns, shows that contaminated MUPTs could be detected with 84% and 81% accuracy for simulated and real data, respectively. For a given contaminated MUPT, the algorithm on average correctly classified around 92.1% of the MUPs of the MUPT. The effectiveness of using the developed MUPT validation systems and the MUPT editing methods during EMG signal decomposition was investigated by integrating these algorithms into a certainty-based EMG signal decomposition algorithm. Overall, the decomposition accuracy for 32 simulated and 30 real EMG signals was improved by 7.5% (from 86.7% to 94.2%) and 3.4% (from 95.7% to 99.1%), respectively. A significant improvement was also achieved in correctly estimating the number of MUPTs represented in a set of detected MUPs. The simulated and real EMG signals used were comprised of 3–11 and 3–15 MUPTs, respectively.