Design and Implementation of IGBT Based Power Supply for Food Treatment 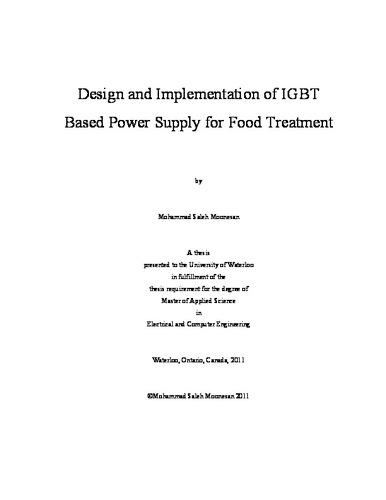 Pulsed electric field (PEF) processing has been demonstrated to be an effective non-thermal pasteurization method for food-treatment applications. With this method, high voltage, short-duration pulses are applied to a chamber through which liquid food is passed. If the voltage applied and the corresponding electric field develops a potential higher than a critical trans-membrane potential, the pores expand, and the membrane of the living cell is ruptured. Due to the lower amount of energy consumed during a PEF process, the temperature of the liquid is kept much lower than as opposed to conventional pasteurization. The PEF method thus kills bacteria and other microorganisms while preserving the nutrition and taste of the liquid foods. Although the parameter responsible for inactivation is the voltage applied, for any given voltage, the conductivity of the liquid defines a current through the liquid that causes the temperature to rise. Therefore, preventing excessive heating of the liquid requires the application of an efficient waveform. According to the literature, the most efficient waveform is a square wave since the entire energy applied would be used for the inactivation process. Although some power supplies are capable of generating such a waveform, the generation of an efficient waveform that satisfies all the requirements for producing a viable product for PEF applications is still a challenging problem. In this research, a cascadable pulse generator, based on a Marx generator design, was designed and implemented in order to generate a pulsed waveform for the treatment of liquid food. IGBT switches were used to charge capacitors in parallel and to discharge them in series as a means of generating a high voltage at the output. The design was implemented and tested for two stages, generating up to 6 kV and 1.6 kA square pulses with a controllable pulse width from 1 µs to 10 µs. Up to 3 switches were connected in parallel to enhance the current capability of the system. Also investigated are ways to improve the transient time by enhancing the IGBT driver circuit. The effect of design parameters such as pulse width, voltage, and current on the temperature rise in the liquid was also studied. A variety of liquid foods with different conductivities were tested in order to confirm the functionality of the system.