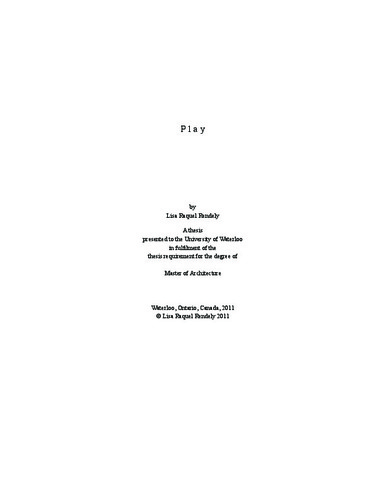 Adults in North American society lack the natural ability of children to play and explore their environments in a non-judgemental, non-programmed manner. The underlying theories of James Carse and Johan Huizinga examine play and its effects on adult culture. St. Louis Adult Education and Learning Centre in downtown Cambridge, Ontario serves as a testing ground for an adult play-space. Presently, the school lacks any public, non-programmed spaces to accommodate the student population, largely comprised of single, teenage mothers. Aldo van Eyck’s architecture, together with his theoretical essays, heralded the importance of play in culture and to the individual. Van Eyck created a network of playgrounds to revitalize and rehabilitate the city of Amsterdam after the Second World War. His designs of the temporary Sonsbeek Pavilion and sculpture garden in Arnhem, the Netherlands, brought play into the cultural realm of 1966. Van Eyck’s design of the Sonsbeek pavilion concretizes the play-theories of Carse and Huizinga. A collage of the Sonsbeek Pavilion inserted into the empty grounds at St. Louis tests the play theories of van Eyck, Carse and Huizinga. It provides a space for play where no play currently exists. The Sonsbeek Pavilion’s heavy, concrete walls and labyrinthian plan swallow the players, who become immersed in a place of play. As the player moves through the pavilion, the view shifts to provide or block views of the adjacent spaces. The pavilion proposes a site of exploration and surprise. It provides the possibility for the adult students, the teenage mothers, their children, and the surrounding community to play.