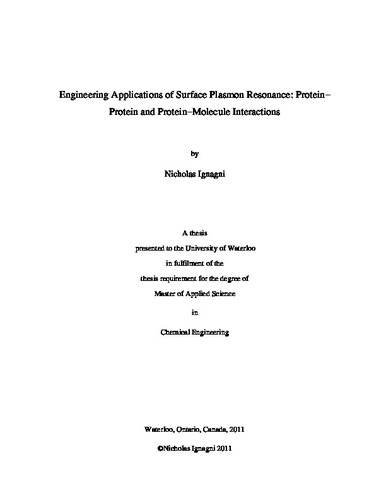 Protein-protein and protein-molecule interactions are complicated phenomena due to the tendency of proteins to change shape and function in response to their environment. Protein aggregation whether onto surfaces or in solution, can pose numerous problems in industry. Surface plasmon resonance (SPR) devices and quartz crystal microbalances (QCM) are two real-time, label free methods that can be used to detect the interactions between molecules on surfaces. These devices often employ self-assembled monolayers (SAMs) to produce specific surfaces for studying protein-protein interactions. The objective of this work was to develop methodologies utilizing SPR to better understand protein-protein and protein-molecule interactions with possible applications in the food and separation industrial sectors. A very well characterized whey protein, β-lactoglobulin (BLG), is used in numerous applications in the food industry. BLG can undergo different types of self-aggregation due changes in external environment factors such as buffer strength, pH or temperature. In this work, a hydrophilic SAM was developed and used to study the interaction and non-specific adsorption of BLG and palmitic acid (PA), a molecule which is known to bind to BLG. It was found that PA tended to reduce BLG conformational changes once on the surface, resulting in a decrease in its surface adhesion. Fluorescent excitation emission matrices (EEM’s) using a novel fluorescence probe technique were utilized to detect protein on the surface as well as conformational changes on the surface of the sensor, although the extent these changes could not be quantified. Another whey protein, α-lactoglobulin (AL), was utilized as a surrogate protein to study the adsorption of colloidal/particulate and protein matter (CPP) extracted from filtration studies of river water. A large fraction of natural organic matter (NOM), the major foulant in membrane based water filtration, is CPP and protein. Understanding the interactions between these components is essential in abating NOM membrane fouling. Several SPR methods were investigated in order to verify the interactions. A mixture of AL and CPP particles in solution prevented the non-specific adsorption of AL to the SAM surface. This change in association was then detected through SPR. Fluorescent EEM’s of the sensor surface verified that CPP and AL bound to the surface. This finding has fundamental significance in the interpretation of NOM-based membrane fouling. To better understand the mechanisms behind non-specific adsorption, a mechanistic mathematical model was developed to describe the adsorption of BLGs onto the hydrophilic SAM. The resulting model performed well in terms of predicting adsorption based on SPR data. The model incorporated the monomer-dimer equilibrium of BLG in solution, highlighting the impact of protein aggregation on non-specific adsorption mechanisms. For future studies, improvement in fluorescent FOP surface scan methodology would help identify different protein/molecules and conformations on the surface.