Negotiating Boundaries, The Veil: The Appearance of the Invisible 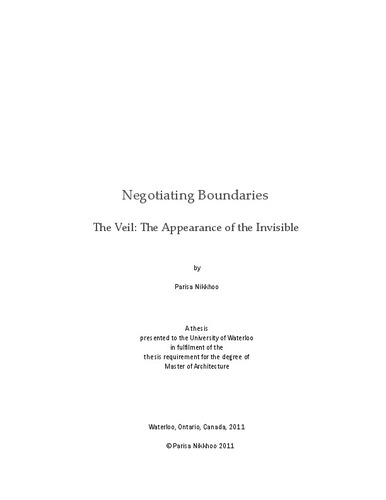 The chador is more than a matter of taste in clothing or a religious regulation; it is the incarnation of a belief, a culture, and a tradition. Intermingled with it are the profound emotions of the women who have been either voluntarily or forcibly practicing the wearing of the veil. The intention of this thesis is to allow one to see the chador as an extended threshold that both invites and rejects. By concealing the body of the woman, the veil establishes a complex relationship, repelling the external world while simultaneously drawing attention to itself. In passing through this threshold, one will begin to see the invasion of colors, - blue as sacredness, white as peace, and red as rebellion gradually dispersing into the air and onto its monotonous black surface. In this in-between space, brightness battles with darkness, as it tries to trickle in through the minimal openings. One may begin to wonder if a woman is protected as if in her house, or bounded as if in a cage. One will thus find herself with a sense of uncertainty - whether to stay or to leave. This thesis aims to explore the chador and the space between it and the body of the woman. The chador has been constantly questioned from both cultural and religious perspectives. It creates a specific space that, from an architect’s point of view, requires an investigation as an externally imposed zone. As a physical manifestation of the chador, this thesis proposes a theatre in which the journey from the entrance, vestibules, and galleries, through the stage, and into the house will allow one to experience and assimilate the senses buried within the veil and the body of the woman.